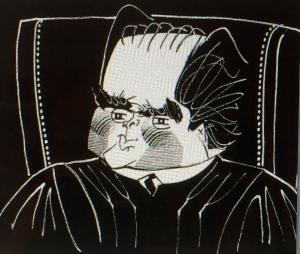 Illustration by Tom Bachtell for The New Yorker, February 29, 2016

This week’s issue of The New Yorker‘s “Talk of the Town” section opens with a stunning comment on the passing of the late Justice Antonin Scalia by Jeffrey Toobin, a staff writer, frequent contributor and author of several books on legal issues.  It stuns in the clarity with which it sums up Scalia’s work on the United States Supreme Court. I have not yet read anything like it, and what Toobin writes needs to be said.

It’s all very well not to speak ill of the dead.  But there’s an important difference between not speaking ill and stating the facts.  Now that the time for obsequies and personal encomiums to the late Justice’s wit, love of opera and dedication to his job has passed, it’s time to state plainly what he tried to accomplish during his many years on our country’s highest bench and how nearly he succeeded.

When I was in law school, we used to joke in Constitutional Law classes that the Constitution is what the Supreme Court says it is.  Humorous, but true. With the passing of Justice Scalia, we’re at a hugely important tipping point for our country.  Whether or not our obstructionist Republican-majority Senate succeeds in blocking hearings on the President’s nomination for his replacement, it’s reasonably certain these obstructionist senators are fighting a losing battle.  Here’s Toobin on the subject. (I’ve omitted some of it, for which you’ll have to go to The New Yorker itself. But this is the gist.) He says it much better than I could.

Antonin Scalia, who died this month, after nearly three decades on the Supreme Court, devoted his professional life to making the United States a less fair, less tolerant, and less admirable democracy. Fortunately, he mostly failed. Belligerent with his colleagues, dismissive of his critics, nostalgic for a world where outsiders knew their place and stayed there, Scalia represents a perfect model for everything that President Obama should avoid in a successor. The great Justices of the Supreme Court have always looked forward; their words both anticipated and helped shape the nation that the United States was becoming. Chief Justice John Marshall read the new Constitution to allow for a vibrant and progressive federal government. Louis Brandeis understood the need for that government to regulate an industrializing economy. Earl Warren saw that segregation was poison in the modern world. Scalia, in contrast, looked backward.

His revulsion toward homosexuality, a touchstone of his world view, appeared straight out of his sheltered, nineteen-forties boyhood. When, in 2003, the Court ruled that gay people could no longer be thrown in prison for having consensual sex, Scalia dissented, and wrote, “Today’s opinion is the product of a Court, which is the product of a law-profession culture, that has largely signed on to the so-called homosexual agenda, by which I mean the agenda promoted by some homosexual activists directed at eliminating the moral opprobrium that has traditionally attached to homosexual conduct.” He went on, “Many Americans do not want persons who openly engage in homosexual conduct as partners in their business, as scoutmasters for their children, as teachers in their children’s schools, or as boarders in their home. They view this as protecting themselves and their families from a life style that they believe to be immoral and destructive.”

But it was in his jurisprudence that Scalia most self-consciously looked to the past. He pioneered “originalism,” a theory holding that the Constitution should be interpreted in line with the beliefs of the white men, many of them slave owners, who ratified it in the late eighteenth century…. [He] spent thousands of words plumbing the psyches of the Framers, to conclude (wrongly, as John Paul Stevens pointed out in his dissent) that they had meant that individuals, not just members of “well-regulated” state militias, had the right to own handguns. Even Scalia’s ideological allies recognized the folly of trying to divine the “intent” of the authors of the Constitution concerning questions that those bewigged worthies could never have anticipated. During the oral argument of a challenge to a California law that required, among other things, warning labels on violent video games, Justice Samuel Alito interrupted Scalia’s harangue of a lawyer by quipping, “I think what Justice Scalia wants to know is what James Madison thought about video games. Did he enjoy them?”

Scalia described himself as an advocate of judicial restraint, who believed that the courts should defer to the democratically elected branches of government. In reality, he lunged at opportunities to overrule the work of Presidents and of legislators, especially Democrats. Scalia helped gut the Voting Rights Act, overturn McCain-Feingold and other campaign-finance rules, and, in his last official act, block President Obama’s climate-change regulations. Scalia’s reputation, like the Supreme Court’s, is also stained by his role in the majority in Bush v. Gore. His oft-repeated advice to critics of the decision was “Get over it.”

Not long ago, Scalia told an interviewer that he had cancelled his subscription to the Washington Post and received his news from the Wall Street Journal, the Washington Times (owned by the Reverend Sun Myung Moon’s Unification Church), and conservative talk radio. In this, as in his jurisprudence, he showed that he lived within the sealed bubble of contemporary conservative thought. That bubble also helps explain the Republican response to the new vacancy on the Court. Within hours of Scalia’s death, Mitch McConnell, the Senate Majority Leader, announced that the Senate will refuse even to allow a vote on Obama’s nominee, regardless of who he or she turns out to be. Though other Republican senators have indicated that they might be a little more flexible, at least on hearing out a nominee, the chances of a confirmation before the end of Obama’s term appear to be close to nil.

This Republican intransigence is a sign of panic, not of power. The Court now consists of four liberals (Ginsburg, Stephen Breyer, Sonia Sotomayor, and Elena Kagan) and three hard-core conservatives (Roberts, Clarence Thomas, and Alito), plus Anthony Kennedy, who usually but not always sides with the conservatives. With Scalia’s death, there is a realistic possibility of a liberal majority for the first time in two generations, since the last days of the Warren Court. A Democratic victory in November will all but assure this transformation. Republicans are heading to the barricades; Democrats were apparently too blindsided to recognize good news when they got it.

…. Scalia won a great deal more than he lost, and he and his allies succeeded in transforming American politics into a cash bazaar, with seats all but put up for bidding. But even though Scalia led a conservative majority on the Court for virtually his entire tenure, he never achieved his fondest hopes—thanks first to O’Connor and then to Kennedy. Roe v. Wade endures. Affirmative action survives. Obamacare lives. Gay rights are ascendant; the death penalty is not. (These positions are contingent, of course, and cases this year may weaken the Court’s resolve.) For all that Presidents shape the Court, the Justices rarely stray too far from public opinion. And, on the social issues where the Court has the final word, the real problem for Scalia’s heirs is that they are out of step with the rest of the nation. The public wants diversity, not intolerance; more marriages and fewer executions; less money in politics, not more. Justice Scalia’s views—passionately felt and pungently expressed though they were—now seem like so many boats against the current, borne back ceaselessly into the past.

12 thoughts on “TELLING IT LIKE IT IS ABOUT SCALIA”