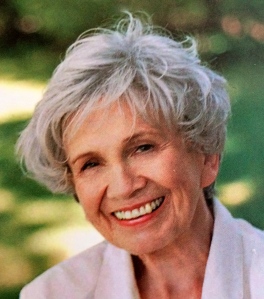 Since this is by definition a blog about getting old, It seems fitting not to leave 2013 behind us without a tribute to Alice Munro, the 82 year-old Canadian short story writer who this year won the Nobel Prize for Literature.

What makes her Nobel so unusual is not that Munro is a woman or Canadian — but that she hasn’t written novels, or big think books, or inspirational literature.  She hasn’t tried to change the world, or stir it up, or scold, or exhort.

All she’s ever done is write short stories, usually but not always about the lives of ordinary girls and women.  But in staying within this limited metier, she has transformed our conception of the short story. Even each of the stories in her first collection, Dance of the Happy Shades (published when she was 37) — although conventionally linear in development from a beginning through a middle to the end —  creates a spacious and entirely three-dimensional world within its relatively few pages.

As she went on, however, the stories became longer and their shapes began to change.  You could call them globular.  In her calm conversational way, she might start in the middle or at the end, or off to the side (although you didn’t always know it as you were reading) — and by the time you had come to the last sentence you had to go back to read it all over again to find what you had missed.

Sometimes what you had missed wasn’t even on the page. It was implied.

She has said that Dear Life, the most recent collection of her stories to be published, will be her last and that she is not going to write any more.  (I understand she has been ill, is a cancer survivor and has heart problems.)  Indeed, I don’t think it is her best collection.  Perhaps it represents a slight falling off.  Perhaps she knows that.

Therefore, if you are unfamiliar with her work I wouldn’t start there. Open Secrets (1994) or Hateship, Friendship, Courtship, Loveship, Marriage (2001) might be more representative of Munro in her prime.

But I do want to end with a piece from Dear Life. I have recently been posting about last paragraphs.  Munro gives us memorable last sentences.  Many are of the kind I’ve just described — pointing you back to the beginning of a story to savor it in its entirety.  But occasionally she gives us another kind of last sentence.  You think you are reading about someone else, usually in Canada and far from you — someone who has nothing to do with you. And then suddenly there it is:  a last sentence that jumps up off the page and bites you in the ass.

This piece from Dear Life (which is itself also called “Dear Life”) is — unusually for Munro — not a story but one of four short memoirs of her childhood, the only ones she says she has ever done or ever will.  Here she tells us of the house she then lived in, down a long long road away from town, and of a possibly dotty old woman who once came snooping around when she was a baby in her carriage, and how her mother — alone in the house — grabbed baby Alice from under the covers and ran for dear life (as her mother used to say) back into the house for safety. The piece then moves on to Alice’s life as a young married woman in Vancouver, and ends like this:

I did not go home for my mother’s last illness or for her funeral.  I had two small children and nobody in Vancouver to leave them with. We could barely have afforded the trip, and my husband had a contempt for formal behavior, but why blame it on him?  I felt the same.  We say of some things that they can’t be forgiven, or that we will never forgive ourselves.  But we do — we do it all the time.

That’s the last sentence of the last piece in the last book she says she will ever write. It’s about me, and you, and all of us.