Even as a young girl eagerly devouring the “ladies” magazines my mother brought home from the corner newsstand, I thought the advice I found there about keeping a husband’s interest after marriage quite unfair. Especially the part about hurrying to the bathroom to apply makeup before he woke up and caught you with a nakedly unadorned face.  Although privately agreeing with the magazine beauty columnists that one looked much better enhanced by the sorcery of cosmetics than not, I did wonder how come the man didn’t have to do anything special to keep the marriage going.  Of course this was a long time ago, when in most marriages — as I realized long before I had finished high school — the man earned all or almost all the money and the woman’s job, if you could call it that, was to make sure he wanted to go on supporting her.

Whether a heavily made-up face was what a man fantasized about in the privacy of his side of the double bed is another question entirely, and not within the purview of this piece, wherever you thought its headline was leading.  But even if the magazine editors didn’t quite get the male psyche, they were right on the button with the then-economic interests of their readers. Keep yourself attractive, by whatever standards then obtained. Whether “attractiveness” also included faking pleasure between the sheets even where there really was none was probably determined privately by the woman on a case-by-case basis. In any event, back in those long-ago days when I was still living under my parents’ roof, I thought both parties simply exploded simultaneously with some kind of as yet unimaginable joy upon vaginal entry,  which meant that kind of fakery was not an issue.

When at last old enough actually to share a double bed with another, I never was able to force myself to reach for the cosmetic case before he opened his eyes.  However, time had marched on and that was no longer key.  What you were supposed to be was thin, or thinnish (even if “thin” didn’t come naturally); you also had to wear a panty girdle or girdle even if you were thin so nothing at all could possibly jiggle, so your behind was one unbifurcated cheek (preferably perky), and also so any bumps at the top of your thighs, however slender, wouldn’t show in a sheath dress or skirt. That was just to get to first base with a man — long before the necessity of having to keep his mind on you after marriage.

Ideally, you also had to be able to manage your hair, do without glasses in social situations, be a lady in the living room and a whore in the bedroom.  Of course plenty of women did get to first base without some or all of these qualities (myself certainly included), but most of us nevertheless hated one or more parts of our bodies because they didn’t look the way they were “supposed” to look and therefore struggled with as many fakeries as we could afford. (Hot rollers, padded bras, stilettos that improved the ankles but were killers to walk in, dieting in public but raiding the fridge once the girdle was off for the night; I’m sure every female reader of a certain age has her own list.)  I remember asking both a journal when I kept one, and a psychotherapist when I could pay one, “Why can’t I be loved just for me?”

Indeed, who doesn’t want to be loved just for being who they really are?  And yet long after marriage — or multiple marriages — most of us continue to play games with the truth. If we’re lucky, not so much on the domestic front as we and our men grow older and more realistic about what is important, and lovable. But almost always in the outside world, in order to survive. Although I haven’t worked for pay for over ten years,  I still keep a moralizing magnet on my refrigerator acquired during all those decades of having to market myself to successive employers, latterly at an age which on paper might have looked like the kiss of death: “Good clothes open all doors.”  They do, and they did.  Of course, once the door opens and you walk in, the clothes aren’t enough.  You’ve got to be up to scratch on all the multiple facets of the work you’re applying to do.  But you never get to that if the door never opens.

Bottom line: some form of fakery is probably necessary in a market economy for almost every kind of success.   For instance, as a new late-life lawyer in a large firm I soon learned my professional survival would likely depend on keeping to myself all real opinions about the value of what we were doing on behalf of our huge corporate clients.  Do I therefore owe my legal career, and consequent ability to achieve a modest retirement  before death, to the fact that I had little yellow stickies on my computer and inside my front desk drawer reminding me all day long to KYMS?  (My personal acronym for “Keep Your Mouth Shut.”) Not entirely. Good work was also involved.  But KYMS was an excellent start.

Which brings me to yet another example:  selling residential real estate, where the fakery is known in the trade as “staging.”  I learned all about staging in 2005 while selling the first property I had ever owned only in my own name: a two-bedroom, one-bath walk-up apartment on the second floor of a a semi-historic building in Cambridge, Massachusetts.  The building may have been old, but it did have charm and a good address, and the floor-through apartment had “good bones.”  Moreover, I was basically neat, and didn’t own a lot of crap because I had left most of it in the marital home when I moved out six years before buying the Cambridge apartment.

Then I met Bill.  I had bought the apartment  without foreseeing a second occupant, especially one who collected “stuff.”  Bill brought his smaller possessions with him.  (The larger ones, I learned later, were in storage.) Where to put them?  There was one sizable locker unit two floors down in the basement of the building, but it was already fairly full of beloved old grade school math notebooks and incomplete sets of Clue and Monopoly belonging to my two adult but as yet unmarried sons.  Besides, Bill didn’t really want to be rummaging around in a dark basement locker every time he wanted something.  So any available surfaces of my previously uncluttered home began to look like this: 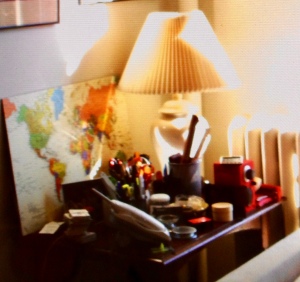 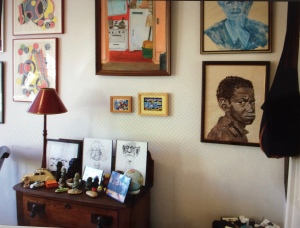 Cambridge 2005: Other table in den. (Formerly holding only lamp. Big pictures mine; small pictures his.)

Since I wasn’t blogging in those days, I have no photographs of his side of the bed with its cluttered bureau top and piles of books on the floor, or of the single bathroom after it had acquired his toiletries and nutritional supplements as well as mine. However I’m sure you can imagine. (Having the two photos above was dumb luck.) “Great apartment,” said the friendly realtor. “But you’ll have to clear all this stuff away.”

“Where shall I hide it?” I asked plaintively.

“Wherever.” She waved her hand blithely.  “I’m sure you’ll find a place.”