[When TGOB was new last November, this was the fourth piece I posted. Everything in it remains true. Bill and I are now one year older than when I wrote it, but we’re still here.  Keep your fingers crossed…. ]

If I’m lucky, our cat Sasha may push back the slightly open door of our bedroom in the early morning, arrive silently at my side of the bed, miaow once to announce her presence, and wait for me to peer over the side at her. She is beautiful, with a large round head, piercing lemon-yellow eyes and a slight silver sheen to her bluish grey fur.

Silly girl. She thinks she needs an invitation. I inch back a bit towards Bill to make more space between me and the edge, and pat the mattress. “Hi Sasha. Hi sweetheart. Come on. Come on up, Sosh.” I use my talking-to-a-young-child voice, perfectly serviceable in another context forty-odd years later.

She thinks about it. She might still decide to make for the litter box in the adjoining bathroom; get a drink or a snack from one of the two bowls against the wall; head for the Shaker-style set of chairs tied together to make a bench by the double window. There she can look out under the light-proof shade to the leafy street.

But no. This time it’s me and my obliging right hand she wants. Up she jumps into the waiting space, turns around once, twice — sometimes three times — then collapses against me. Her head is towards the foot of the bed, but at just the right horizontal meridian for me slowly to stroke her silky forehead, deeply furred cheeks, velvet ears, and whole delicious length all the way to the thick tail extended against my cheek.

After a while she gives a half-turn so that my hand can do her belly, a paradise of angora down. Claws in, her paws manipulate me. She knows exactly where she wants it — up, down, between the spread legs, not quite there, a little higher. I obey, a lover wishing only to please. All of her vibrates with a low rumbling purr. She is happy.

I am happy, too. I lie on my back, eyes closed — right hand on her, left hand clasped in Bill’s — enveloped in creaturely security. I feel his even breathing along one side of me, hers along the other against my midsection — all of us warmly wrapped in quilt, conjoined, our three hearts beating steadily.

I want it to last forever. (Don’t say anything. I know, I know.) And sometimes, since neither Bill nor I need jump to the ring of an alarm, it does last — if not forever, at least for a couple of hours. Sasha falls asleep, my hand stills, imperceptibly Bill and I doze off, in the comfort of a time-suspended dream.

Sasha and Sophie are house cats.  They are not allowed to go out.  Not without me, that is.

Unfortunately, going out with me involves wearing a harness with a leash attached.  Cats don’t take kindly to being harnessed, and Sophie — the younger of the two — still will not submit to it.  Out come her claws as she struggles, and back into the drawer goes her harness. Another time perhaps.  But Sasha, now five years old, has learned the rare appearance of the harness means something exceptionally good is going to happen. She will get to explore the great Outdoors.

Our cats are not entirely housebound.  There’s a wire-fenced deck off the kitchen, from which they can smell foliage, hear birdcalls, spy on squirrels scampering through the underbrush in the rear of the condo.  But there’s no grass under the paws, no growing leaves to munch, no trees on which to scrape the claws.  And Sasha certainly appreciates the difference.

We don’t go out together often, Sasha and I.  Not in winter, when it’s too cold for both of us.  Not in summer, when it’s too hot for me, since I can’t crawl underneath the low spreading leaves of a grove of trees where it’s cool and shady.  But there’s still spring and fall.

However, walking a cat is not like walking a dog.  You go where the cat wants to go,  not vice-versa.  It takes a long time, it’s tedious, and sometimes it’s hard to get her back in the house when I’ve had enough.  Not that we go very far.  Usually she just slowly circles the five-unit structure in which our condo is located, investigating every ground planting in the front, and making a few careful forays into the uncleared and dedicated forest land behind.

Exciting though it may be for her, it’s boring for me.  Especially as there’s really nowhere to sit down while she explores.  But she makes me feel so guilty when I go out without her — and don’t think she doesn’t try to second guess which door I’ll be using so as to run out with me when I leave — that once in a while I carve out an hour of the afternoon just for her.

SASHA GETTING HER GREENS.

Then she can poke around to her heart’s content. Although it makes Bill nervous when he sees me do it, I do let go of the leash if she ventures where I can’t or don’t care to follow.  The harness is red, so it’s easy to spot, even at a distance.  And she doesn’t go far. When I call, she even waits for me to catch up. That way I have both hands free to try to take her picture.  Or should I say pictures? I have to snap six for every one that’s usable.

WHEN I LET GO OF THE LEASH, THE HARNESS TWISTS AROUND. BUT SASHA DOESN’T SEEM TO MIND.

But I am doing something.  I’m enjoying her appreciation of the big wide world.

WE CAN ALWAYS TELL OUR TWO CATS APART BY SASHA’S GOLDEN EYES.

APPARENTLY A CAR JUST PASSED BY. THAT’S NOT SUPPOSED TO HAPPEN. (ACCORDING TO SASHA.)

Eventually, though, even she gets tired.  When we pass the deck chair on the front walk, she settles down for a rest.  Soon I’ll be able to pick her up without her fussing, and carry her into the house. 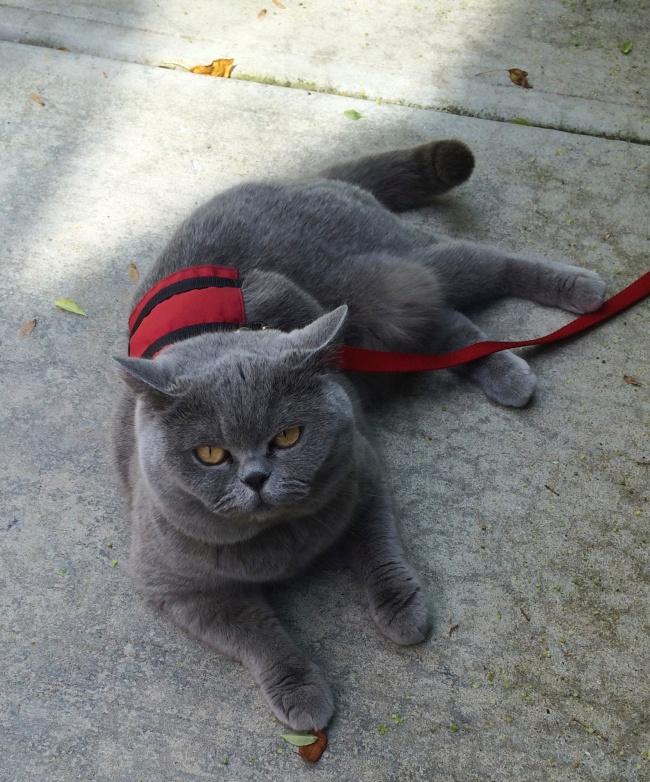 LOVING LOOKS MAKE EVEN THE THREE ITCHY BUG BITES I COLLECTED OUT BACK WORTH WHILE.