[Continued from five previous posts: “My mother was born on or about July 16, 1904 in or near what was then Vilna, Russia, to Vladimir Vainschtain and Berta Isaakovna Vainschtain (nee Shulman)….” When she was ten, her father died and her mother took her and her five-year-old brother to Baku, where she was sent to live with a married half-sister.] 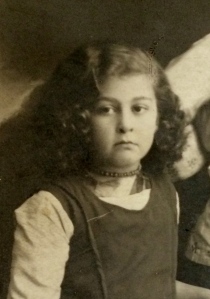 LIFE IN BAKU.  This is what I know about my mother’s life in Baku:

School.  She said she had not been a remarkable student, and did not especially like school. Her best subject was mathematics. On a scale of 0 to 5, her marks — I am using her term — were always 5 in mathematics, usually 4 in everything else. (Mathematics probably meant arithmetic, at least at first, although later it would also have had to include algebra, geometry, and maybe even calculus.)  However, her academic performance was good enough to win her one of the few places reserved for Jewish girls in a “gymnasium” — one of the official schools in Tsarist Russia from which a diploma was necessary for entry to any institution of higher education.  Admittance to a gymnasium — for everyone — was by examination, but  the competition for the few Jewish places was fierce, especially where the Jewish population was large. According to a memorandum my father wrote of his own early life in Russia, the Jewish quota for all officially approved schools was ten percent of the student population. My father added that when his brother, five years older than he was, took the examination, there were not many Jewish families in Baku, and even fewer Jewish children, so it was relatively easy to win a place. But when the time came for him to apply, it was a different story!  A flood of people had come south, fleeing first the war, then the Communist takeover in the north — and of course among them many more Jewish families. My mother was two years younger than my father; her own disclaimers about her scholastic achievement to the contrary, her performance on the entrance examination must therefore have been very good indeed.

Piano.  She had wanted to learn to play the piano, perhaps because cousin Lisa had played. Lessons were available to her, but her half-sister had no piano on which she could practice. For a short while she tried to practice on the school piano after hours, when it was not in use. But this seems not to have worked out, and she soon gave up. When I was seven and she was thirty-four, my father bought a Steinway baby grand on time (monthly payments) and arranged for me to have lessons. My mother was very proud of that piano; it had the place of honor in our living room. Every day she dusted it lovingly and carefully wiped down the ivory keys one by one. But when I — the helpful seven-year-old — suggested that now we had a piano she could take lessons too and practice while I was in school, she shook her head. “No, it’s too late,” she said.

Crushes. As she entered adolescence, she lavished love on famous women opera singers and actresses. She even brought the cardboard-backed photograph of one of them to America — her favorite, I suppose. 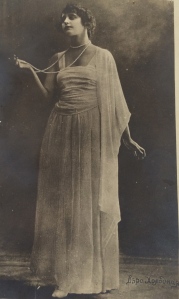 It shows a  svelte woman in a floor-length dress and a long looped string of pearls looking up at the ceiling dramatically. The photograph is signed (in Cyrillic lettering) Vera Kholodnaya; I have no idea who the woman was.  Perhaps a silent film star? A renowned soprano? I remember my mother singing snatches of arias from Tchaikovsky’s Eugen Onegin while she did her housework when I was little.  [As a result, I can sing them, too:  “Shto-tyi, Lenski, nyi tansooi-ish?” Why, Lenski? Why aren’t you dancing?]

Appearances. One summer, she said, she had only two dresses, both white. But every day, she would wash and iron one and wear the other, so that she was always clean and neat.

Dieting. She also dieted, allowing herself every day only one small bunch of grapes and one piece of bread. [Here she would draw with her two forefingers on the kitchen table the outline of the square of bread which had been her self-imposed allotment.] She must have had iron self control. As for the length of time she maintained this spartan program, she never said. Telling me about it, when I myself was trying to slim down for college, was supposed to be inspirational. But by then I recognized a recipe for certain failure when I heard it, and did not seek further detail. My generation counted calories.

Vanity. She squeezed her feet into shoes that were too small for her because small feet, she said, were fashionable in Russia and she was vain. (It may also have been that during wartime and afterwards, pretty shoes were hard to find and you took what there was.) When I was growing up, she wore a 6 ½ and then a 7. She said that in Russia she had sometimes tried to get into a 4. As a result, she developed enormous red bunions that distorted the shape of her feet and later gave her much pain and many visits to chiropodists. It was not until she was nearly eighty that she gave up wearing stylish shoes and consented to become an old lady in sneakers.

Starvation. After the Red Army arrived in Baku in 1920, food became scarce. Soon there were no more potatoes. No more grapes. Bread was rationed. And what bread was available was so adulterated with sand she developed canker sores from malnutrition.

Romance.  At seventeen, she had a boyfriend. He was blond, with light-colored eyes; his oddly combed hair featured a wave at the upper left temple. He appears at the right side of the front row of a group photograph of university students, sitting on the ground and wearing a jacket with some kind of medal hanging on it.  My mother, unsmiling and plump (despite the diet), with long brown hair loosely heaped up beneath a large hat, is seated near the center of the second row. 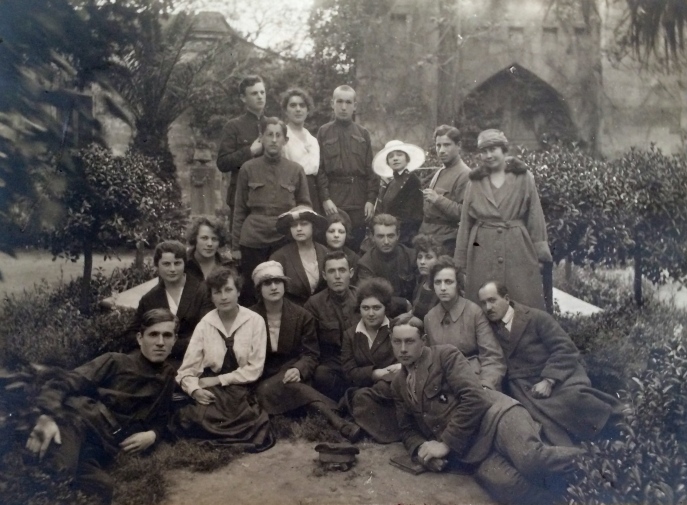 Although they’re not sitting near each other, I know the blond one with the wave is the boyfriend because among the photographs she brought with her from Russia is a separate small photo of the same young man; the hair, wave and medal are identical. 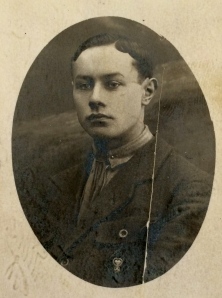 On the back of the small photo, in pale violet writing so faint it would be illegible even if I could read Russian, is a personal message to my mother from the subject of the photograph.  They saw each other for about six months, she said. Once she also told me they were engaged. I now think this means she slept with him, a confidence she would never have shared with me at the time in so many words. [After becoming a mother, she put her own past conduct behind her and adopted the two principles on which American mothers were then allegedly raising their daughters: (1) Men want only one thing; and (2) No man will marry used goods.]

Another loss.  This fiancé was not my father. So how did they break up?  (At last, a juicy part of the story!)  My mother pursed her lips and smoothed the sleeve of one of my father’s dress shirts on the ironing board before sprinkling it with water from a glass. “His family was connected to the nobility,” she said. “So they arrested him.”  And? The hot iron made a sizzling sound on the damp shirt. “We went every day to the prison.” She didn’t explain who “we” was. “Until we found his name on the list.” “What list?” I asked. “The list of those who had been shot. ” My mother turned my father’s shirt over on the ironing board to do the back.

MY FATHER.  Not long afterwards, my mother met my father, an engineering student at the Technology Institute in Baku –probably during the summer she turned eighteen, or just before.  “How did you meet?” I asked.  “At university,” she answered.  My father was more specific.  They had mutual friends, who introduced them on the esplanade running along the shore of the Caspian Sea.  Four or five months later, he managed to bring her out of Communist Russia with him. They made this exodus sound simple when I first heard of it.  He asked if she wanted to come.  She went to ask her mother if she should go.  Her mother’s response is the only thing she ever told me Berta Isaakovna said to her.  There was no equivocation:  “If you can get out, get out.  There’s nothing for you here.”  My grandmother also sold a featherbed and a pair of pearl earrings to give my mother the money to pay her passage.

But it wasn’t simple.  “Getting out” was far from easy.  However, I have already written that story elsewhere. It appeared in an online magazine called Persimmontree. You can read it here, if you like. This may therefore be a good place to stop, before my mother and father reach America, speaking no English, but leaving war, hunger, and executions behind them forever.

When they were both in their early eighties and my father happy to reminiscence, I asked him once why he had invited my mother,  met so recently, to come with him to America. He thought about it for a moment, smiled, and said, “I wanted sex.”  I looked at my mother — that staunch advocate in my girlhood of “Men don’t marry used goods.”

“Mama, was this true?”  She nodded sheepishly, and lowered her head.  And never mentioned it again.  But who’s to say she was wrong to succumb so quickly, and so soon after the execution of the first fiancé?  I have to be glad she did, or I wouldn’t be here to tell you about it.

My mother’s experiences in America may well have further shaped the girl of eighteen who arrived on Ellis Island.  But what she experienced in those first eighteen years — the repeated losses, deprivations, dislocations, fear (whether or not I have got the details quite right) — was formative.  They crippled her as a person, a woman, a mother.  Until she died she was afraid of “them” and what “they” might do.  (You couldn’t ask who “they” were.  She didn’t know.)  She placed excessive value on “money,” both overly respecting and also envying those who had the security and comforts it could buy.  She thought you were nothing without a man, you must do all you could as a young woman to attract one, and then once you had him devote yourself to him and his needs for the rest of your life so as not to lose him  — irrespective of the cost to your own needs and happiness.  She thought it was safest to stay home, it was bad to be Jewish, it was good to be beautiful.  Once I was no longer a little girl, it was never easy to be her daughter.  But that’s another story. 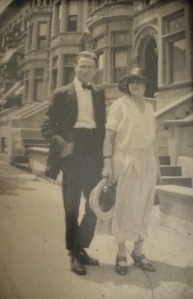 So I will leave you with one last photograph of my mother and father on the streets of New York, six months after they arrived in America.  It was the summer of 1923, when she was nineteen and he was twenty-one and their whole grown-up life in a new country was still to come.

6 thoughts on “THE GIRL WHO BECAME MY MOTHER (PART VI)”