Self image starts early.  Our cat Sophie, now eighteen months old, was the runt of the litter in which she was born.  Her bigger, stronger siblings pushed her away from from her mother’s nipples, and then from the food dishes on which they were being weaned. Although the breeder took to feeding her by hand,  Sophie remained underweight and small for her age. When she came to us at twelve weeks she still looked, if we were honest with ourselves, like a little grey rat with a round head.

That was in September 2012.  Now she’s not rat-like at all.  In fact, she’s slightly bigger than Sasha, our other resident cat, who’s more than three years older.  But Sophie still thinks of herself as the runt.  The one who can’t eat till the others are done. We have only the one other cat, who’s remarkably benign, and not at all possessive about food because there’s always lots of it. But whenever Sophie sees me coming with her dish of defrosted raw meat in the evening, she licks her mouth (yes, she’s hungry)…and then scampers away, as if some other bigger brute of a cat will suddenly appear to take possession of the dish!

If I don’t manage to catch her to begin the feeding process by hand, she will wait around a corner of the wall until Sasha — a light eater — walks away from her own dish, and only then cautiously approach to finish what Sasha left behind.  She will also steal what she considers edible scraps from our plates if I don’t scrape them into the garbage immediately after we finish a meal.

As a result, we’ve had to leave bowls of dry cat food around the house, one in the kitchen, another in our bedroom  — for her to visit surreptitiously, like a food thief, while Sasha’s doing something else.  (Sasha likes the dry food, too.  But there’s plenty, and it doesn’t go bad if left out, so that’s not a problem.)

If Sophie’s self-image ever changes, it will be a very slow process.  She just doesn’t realize what a big beautiful cat she’s become.  And perhaps she never will. 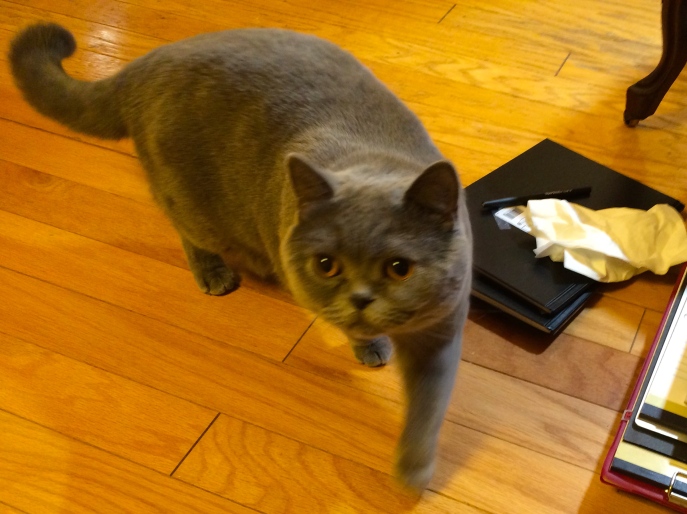 But Sophie’s story isn’t just about a cat.  Watching her reminds me how early we’re all imprinted, while we’re defenseless, with the sense of self we carry into adulthood. Those of us who learn we’re welcome and loved, and thereby grow up strong and healthy in every sense of the word, are fortunate. Others discover, and internalize too early, we’re not desirable as we are.

Bill and I accommodate Sophie in her peculiar eating habits because we love her.  The world usually is not so kind or accommodating to those of us who are not beloved housecats. We have to make it with the sense of self we’ve been given, or it will break us — sometimes slowly, but always surely, unless we can change.

My own life has been mostly about that kind of change.  More of that later.  Maybe. In the meanwhile, you might ask yourself what kind of self-image you were given to carry you through your grown-up life. You’re not a cat.  If you’ve been in difficulties, discovering the answer to your question could be the first step towards changing it.