[Come summer heat, much of my blogging momentum melts away. Hence an experiment until Labor Day: fifty minimalist posts about whatever.]

The small deck behind our sliding glass kitchen doors is one story up from the downward sloping ground beneath it. When you stand on the deck you are therefore in the air, looking out in spring and summer at green tree foliage. There our two housecats safely try snaring the small birds and squirrels frequenting the twin feeders hanging off the top rail. (They have better luck with the occasional crawling insect.) Every year we also put out a few pots of colorful flowers that can withstand hot morning sun with daily watering. An occasional bird dips its beak in the saucers of run-off water.

This year, a helpful garden center saleswoman recommended a few other flowering plants undeterred by blistering mornings. In addition to our usual orange impatiens, we therefore also came home with reddish million bells, orange and yellow zinnias, and — to hang off the railing between the feeders – a large yellow lantana.

Soon two gorgeous new visitors arrived (plus several bumblebees). As one who lived almost all her long life in concrete cities, I had never seen a live butterfly up close. But there it was one morning, fluttering around the lantana for almost twenty minutes, black of wing with white and yellow markings, much larger than I would have imagined and not afraid of me when I came close. News of the lantana must have spread: the next day a second brilliantly yellow and black butterfly joined the first, sipping nectar from its multiplicity of yellow flowers.

Now when I hold the watering can over the lantana each morning, it’s for the two butterflies too. My butterflies. I’m so proud! 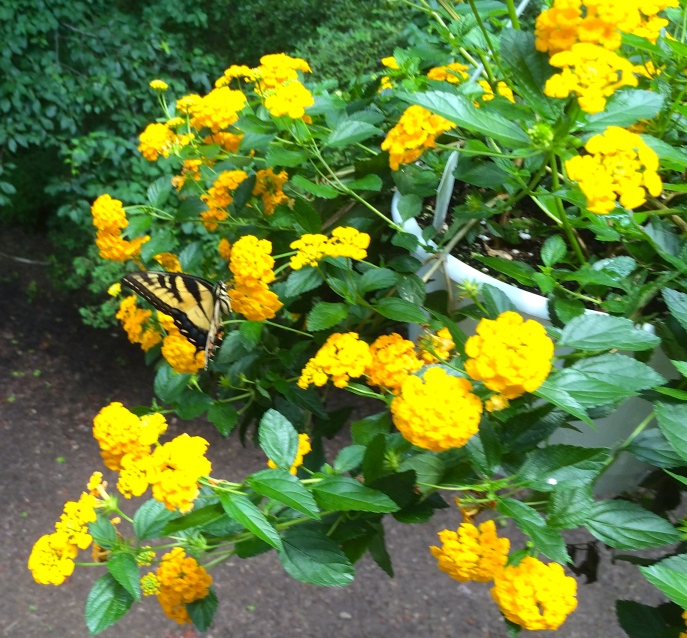 We’ve lived at our present address since 2006 and have generally appreciated the grounds that “come” with our condo, but after eighty-plus years in cities, our horticultural know-how is pretty much nil.  I can identify daffodils and tulips outside, roses, orchids, sunflowers and lilies inside — but that’s about it. And during the time he still maintained a part-time practice in Princeton, Bill didn’t seem particularly curious about nature, either.

Until with time on his finally retired hands, he developed a new thirst for learning what was what. Now he’s always exclaiming about the beauty of this or that, and asking the names of growing things.  Looking out our bedroom window when we wake up, I scan the sky for the weather, he scans the trees.

So it is that whereas I consider the tree directly in front of the building just a tree and don’t ponder further, he has begun gazing lovingly at it first thing every day, especially since its branches developed white flowers a week ago. “Look, look!” he urged this morning.

The tree we’re talking about is the one on the right. (Not the one with creamy parasol-shaped “flowers” at the lower left.)

“Mmm, lovely,” I agreed, heading for the bathroom.

“Take a picture,” he demanded.

“Now, in my nightgown?  It’s cloudy out today.  It wouldn’t be a good picture, anyway.”

“Well not now this minute,” he said. “After breakfast.  Before the flowers are gone.  The petals are already beginning to fall.”

And that was true.  When I looked down at the walkway, it was already covered with a blanket of fallen white petals.  So I took pictures.  Even though it was cloudy.  Enough pictures to satisfy the most demanding of men. 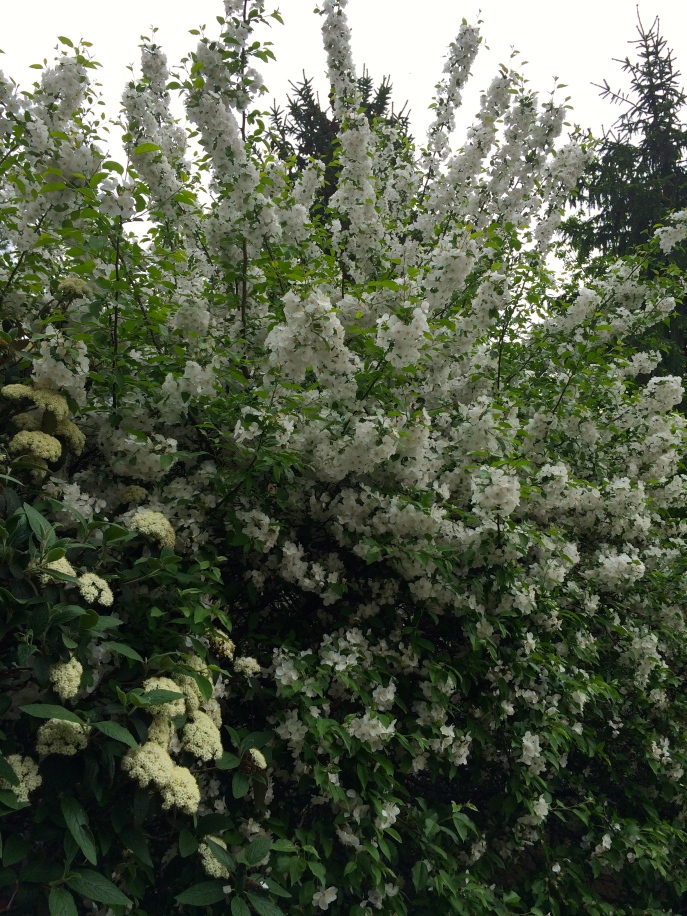 The most demanding of men was happy for about two minutes.  “Great pictures,” he said. “I wonder what kind of tree it is.”

He was asking me?

We referred the question to Google. Could Google identify a briefly white-flowering tree native to New Jersey? Google knew too much.  It told us (with pictures) that “our” tree might be a Cleveland Pear  (because the leaves of that tree, like ours, turn red in the fall) or a Natchez Crepe (because the blossoms look like our blossoms). But the Natchez is described as blooming for 110 days a year, which is definitely not the case chez nous.  And the Cleveland Pear is not described as having a very short blooming season. Moreover, our tree does not  produce pears, not even small misshapen ones. And that was just the first page.

“Why don’t we ask my blog readers?” I suggested.  “Many seem to have comprehensive knowledge of plant life.  Someone is sure to know.”

Then the sun came out.  Which may make determining what kind of tree we have an easier question to answer.  Or perhaps not.  It does make the flowers prettier to look at. 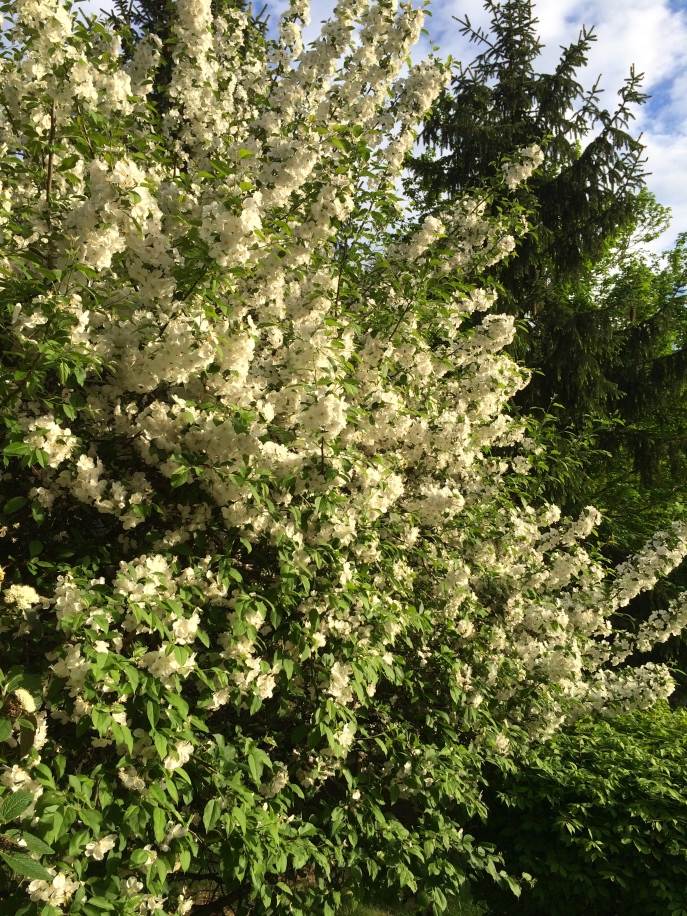 You may have already noticed: when I begin doing something, I find it hard to stop. If it’s not too many words, it’s too many pictures. (But how do I choose which to keep and which to toss?) 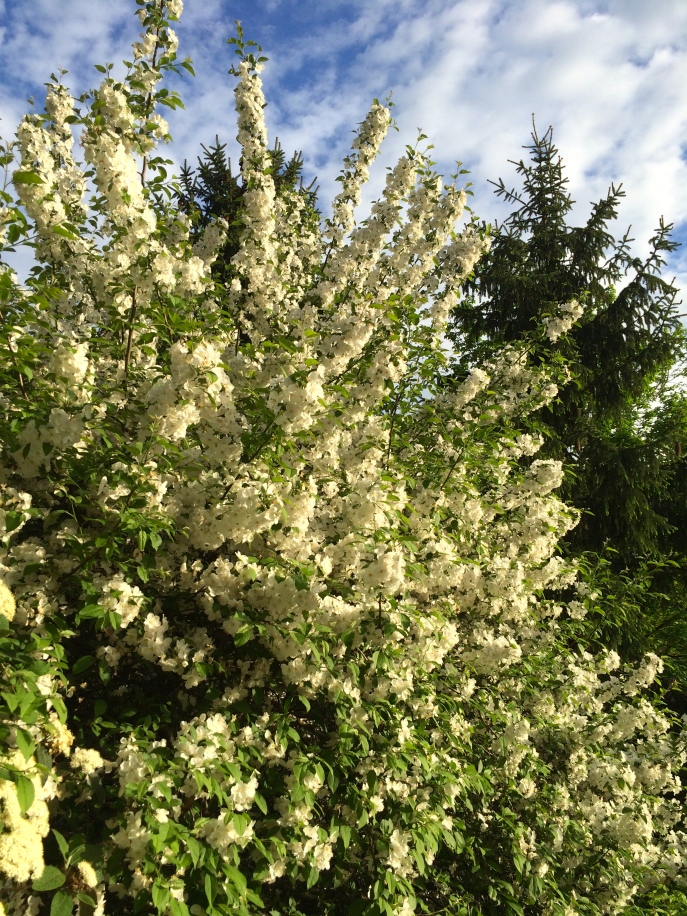 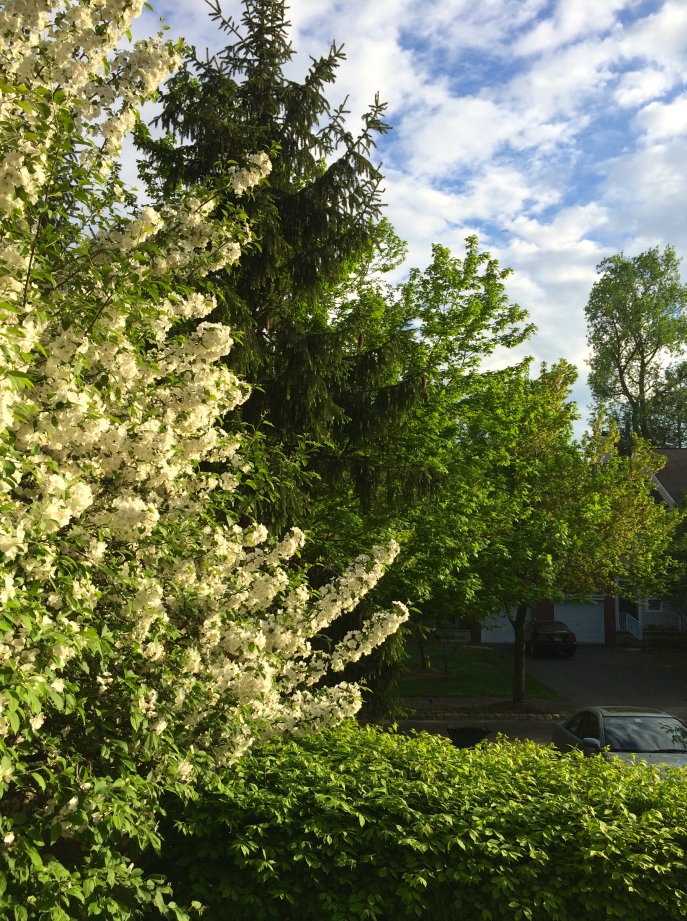 Look all you like.  And if you know what you’re looking at — meaning what in the world is the name of this tree — please tell. Bill would love to know too.

We have three bird feeders hanging off the railing of our kitchen back deck.  I try to keep them filled with black oil sunflower seed. They’ve been emptying with astonishing rapidity, considering the small size of the several species of bird who come to feed, usually a seed at a time.

The culprit, of course, is one extremely clever grey squirrel. (Or perhaps fungible grey squirrels take turns.)  He climbs from the ground and attaches himself upside down to a feeder, where he can considerably lower the level in one feeding.

Poor little guy.  Why shouldn’t he have his own grub so as not to rob the birds?  Yummy unsalted peanuts from the supermarket.  As soon as he discovered them, he went to work:

HE ATE AND ATE.

My taking pictures from behind the sliding glass door didn’t scare him a bit.  He looked me right in the eye and went on munching.

MUCH MORE DELICIOUS THAN BIRDSEED!

At last he’d had enough.

TIME TO LEAVE. (AND TELL THE OTHERS?)

That night it rained.  What do squirrels do when it rains?

(NOTE NEAR-EMPTY FEEDERS THAT WERE FULL THE DAY BEFORE.)

Guess we’re going back to the store today.

The autumn leaves of New England are indeed celebrated for their glorious yellows, oranges and reds during the week or two in early October when they flame into brilliant color before falling to the ground to be swept up, bagged and disappear. (Or else to disintegrate into mulch in heavily forested preserves.) I hear enterprising touring companies in England even organize one-week trips abroad to come look.  (Although in my view that’s a waste of a cross-Atlantic journey.  How long can you look?)

We live three states south of Vermont and New Hampshire, where most of the publicized beauty takes place. So what happens here happens several weeks later.  But Bill’s right. (Even though his enthusiasm for the beauty of it is perhaps a trifle premature.)  It’s beginning.  Now that he’s brought my attention to it, I notice it whenever I step out the door: 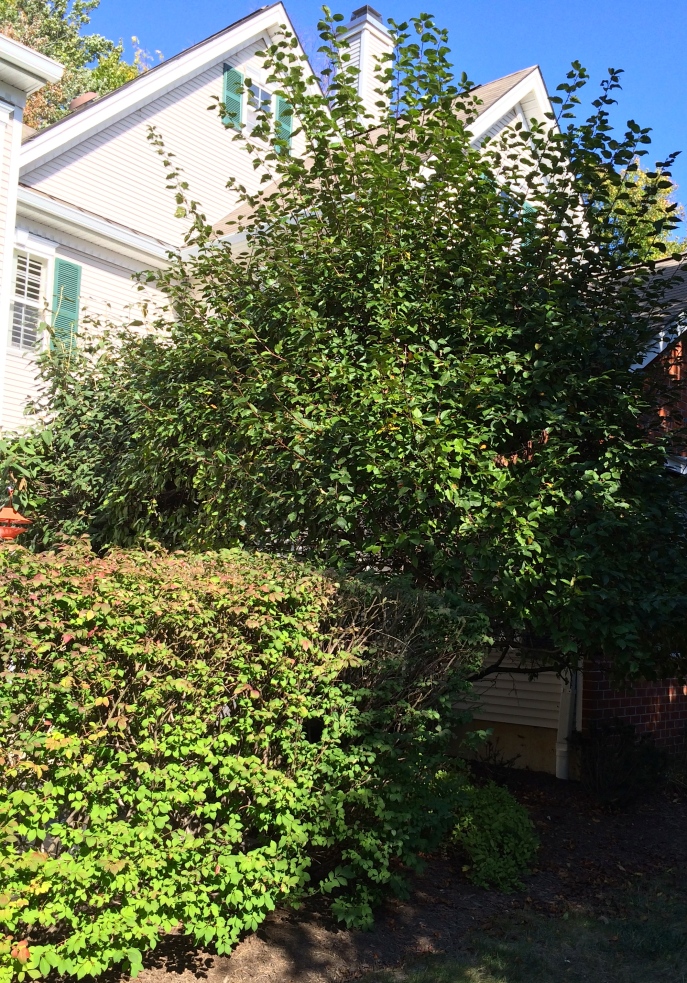 It’s also across the way, where our neighbors live, and where it’s even more pronounced:

Should I be glad we”re soon to have a feast for the eyes whenever we raise them upward?  Or is there something melancholy in this last gorgeously defiant display before the fading of the year?

I suppose it depends on where you stand on life’s arc and how steady your footing.  Now that I’m 83 and — yes, let’s be candid — on life’s downward chronological slope, I can’t help feeling somewhat sad when I see all this dying beauty. And also can’t help hoping I’ll still be around to see it (however sad my feelings) when it returns again and again.

So here’s to years and years more autumn leaves!  Bring them on in all their splendor!  I’m ready.