Eleven months ago, with bravado I didn’t quite feel — I posted, with an exclamation point: “You’re Never Too Old for Adventure!”  Readers liked it. Liked, liked, liked it.  Although months went by without another word from me, the “likes” kept coming. “Good for her!” they were probably thinking.  “Never Too Old!” is in the same category as “Never Say Die!” and “You’re As Young As You Feel!”  Who wants to quarrel with that?

It turns out I was wrong. You can be too old for adventure, at least the kind of activity that normally passes for adventure.  In your head, you may still feel thirty-five. But you’re not.  You realize it as soon as you assess the world into which you still want to plunge like a youngster. Your body doesn’t know from thirty-five anymore.  It starts looking around for a chair by mid-morning. As for “Never Say Die!” – who’s kidding who?  Come on now.

During the eleven months since “Never Too Old!” I ‘ve had to come to terms with the idea that I’m not just “getting old” anymore.  I am old.  Geriatric medicine has categories. You’re “young old” while you’re between the ages of 70 and 85. After 85? Biologically speaking, you’re “old old “ – at least in comparison with other people. (And who else is there to compare with?)  Disregarding all that, I defiantly squeezed an extra year out of being “young old.”  Although I crossed the biological line into “old old” two months after Bill died; immediately afterwards, I sold a condo and bought a new apartment all by myself. (No, my children didn’t help. They were quite sure I could manage, and I could.) Then I went off to Dublin a couple of months after my 86thbirthday.  I looked pretty good. 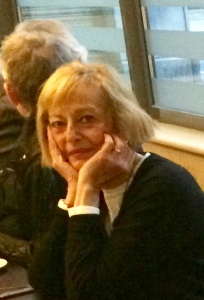 Yet much to my surprise on reaching Dublin, I found I had aged out of interest in organized travel.  I used to feel I had to see everything important in the world that I could afford to get to.  Now I discovered I didn’t. You might think I’d given up, but I really didn’t want to hurry from one cultural treasure to another anymore.  I didn’t relish spending an hour in a hot crowded museum looking at hammered gold necklaces made by pre-Celts, or going to rather amateurish theater featuring adorable young Irish wannabe thespians in their early twenties just because drama is one of the three or four things you travel to Ireland for. There were too many churches and monasteries and castles and estates of the Anglo-English rich filled with opulent furniture for cranky old me. I had the feeling I’d seen it all before, in other countries at other times.

What I liked best was running into Joe Biden in the gift shop of Trinity College with another member of my travel group. (He carefully ascertained which states we were from — blue, of course — before giving a hug, a photo op, and an admonition not to despair.) 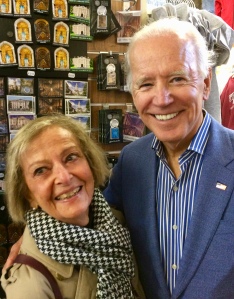 Don’t look at me, look at him!

I also enjoyed the half day of unscheduled time, which I used to amble alone at my own geriatric pace across the Liffey and up Grafton Street to St. Michael’s Wood. I stopped where I wanted (bookstore and dress shop), sat where I wanted (on a park bench), and ate what I wanted (takeout salad from “Chopped”). 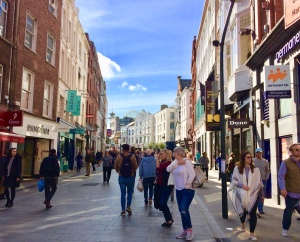 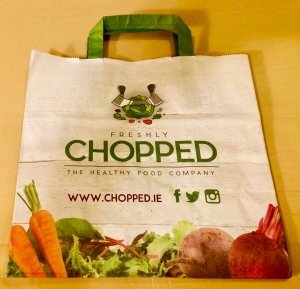 The Dublin lunch for me.

Then I came home – wishing I’d swallowed my pride, caved, and asked for a wheelchair in both airports instead of dragging my carry-on through inspection and miles of corridors all by myself, as I used to do. And soon  – right after Thanksgiving – a first for me came out of the blue:  a-fib, aka atrial fibrillation.  It was the persistent kind, that doesn’t go away on its own. My heart began beating wildly and quickly. This sounds romantic; it wasn’t. I was always out of breath.  I could have died of a blood clot at any time. My internist thought the cause was eating too much pickled herring over the holiday. The cardiologist dismissed the herring theory; he surmised it was because I had sustained two separate colds with different symptoms one after the other just before Thanksgiving.  But whatever the cause, they both announced (without tact or euphemism) that this can often happen “when you’re old,” and agreed I must hurry over to the hospital that very afternoon, stopping off at home only to arrange care for the cats. “Just for four or five days,” promised the internist.

I was in a hospital bed for over three weeks. Really in it. No hopping out to go to the adjoining bathroom. Bells and whistles went off whenever I moved too close to the mattress edge, even inadvertently — bringing frantic nurses admonishing, “No no no.” What happened to the “four or five days?” It seems that during the TEE (transesophogeal echo) performed to ensure there were no clots near the heart before proceeding with  cardioversion, an a-fib corrective procedure  — my heart rate dropped from crazy high to zero. For a nanosecond I was technically dead, although anesthesia prevented me from being conscious of what it is like to die.

The hospital doctors decided I had been unusually sensitive to the anesthetic.  That may be debatable…or not.  Who knows?  My own cardiologist — whom I credit with saving my life on the spot and keeping me alive during the ensuing three weeks it took to bring me out of congestive heart failure — assured me no oxygen was lost. (Meaning no loss of intelligence, ha ha.)  But now I know what it really means, and feels like, when ER doctors on television shows cry out, “Intubate!” They mean they’re going to shove a thick blue tube down the throat of the patient, preventing speech, swallowing, even screaming. There was also a catheter,  the aforesaid confinement to bed (initially in intensive care), and an extremely unattractive thirty-five pounds of water retained during all this which had to be taken out of me, slowly, with strong diuretics and bedpans that kept me awake all night. They also gave me a pacemaker – which involved another “procedure.” It was inserted, again with an anesthetic, near the surface on the left side of my chest.  It will prevent my heart rate from ever dropping below sixty again. Every time I take my clothes off I can see it, looking like a Zippo cigarette lighter with wires tucked just under the skin. It – or its successor – will be there for me to look at all the rest of my life.  Lest I forget what’s keeping me alive.

I got out of the hospital at Christmas – with a walker, and then a cane, still in a-fib and wobbly. I then spent the next fifty-six days at home on Eliquis, a very strong blood thinner, until it was deemed safe –meaning no further danger of clots — for me to go back to the hospital to have another try at the cardioversion which would shock me out of a-fib.  It did. You could say I got my heart back on Valentine’s Day.

There followed another two months of learning to walk on my own again, and struggling with a particular anti-arrhythmic called amiodorone of which it is said, “Your doctor believes the benefit outweighs the risks.”  What they mean by “risks” are unpleasant to dangerous side effects.  During the period I was taking it I had increasing vertigo, uncontrollable tremors in hands and legs, and a foggy brain. I walked like a drunk. I was afraid to step down a curb.  I even fell. The fall persuaded my cardiologist to let me stop taking it; a fall is the almost worst thing that can happen to an otherwise okay old person. In exchange I had to promise to measure my waking heart rate every morning before getting out of bed. (There’s a little machine for this called an oxymeter; I don’t have to count out loud.) If it’s ever over 100 I must let him know at once.

Alas, amiodorone has a half-life in the body of fifty-six to a hundred or more days.  In my case, it took nearly three months to clear. I could tell by the ebbing of the vertigo when I got up from a horizontal position or got back into bed from standing up, and also by my increasing ability to walk a relatively straight line. I think the half-life has finally expired.  But that also means the chance of a-fib returning has risen from 10% when taking the amiodorone. to 50% now. I knock wood, and keep my fingers crossed.

By the way, don’t think it’s over. The pacemaker has to be checked every three months to be sure it’s working.  I also now need to take five medications a day (although not amiodorone, thank God), three of them twice a day (including the Eliquis). They don’t bother me particularly, although one of them does slow me down.  My brain says, “Move!” and I can’t, because something in the body holds back. Moreover, the costs of the non-generic meds have pushed me into the doughnut hole this year, where I’ve never been before. Only Americans over 65 with Medicare Part D insurance for the price of pharmaceuticals will understand what this means.  Once you reach the doughnut hole you’re on the hook for 45% of the cost of your medication for the rest of the calendar year (until you’ve spent $5000 on your own), despite  substantial monthly premiums. One of mine (Eliquis), which you see advertised on the evening network news quite frequently in the United States, costs $1,100+ without insurance for a three-month supply. They don’t mention that in the commercial. But that’s another post.

Oh, I mustn’t overlook my jolly internist – the one who blamed the a-fib on too much pickled herring; he says that at my age (that word again!) it takes a year to get back the strength lost from three weeks in bed. Of course you don’t just wait for it to come back. You have to exercise, keep moving. God forbid you spend a day just reading, or writing, or lollygagging around.

It all keeps you aware you exist only as long as one small, tired 87-year-old organ goes on valiantly beating – with lots of medical and pharmaceutical help.  I never felt particularly vulnerable and fragile before. Now I do. Which hasn’t stopped me from making new plans.  But still…. It’s a different universe I inhabit.

Why didn’t I blog about all this while it was happening? Well, for one thing, I didn’t know how it was going to come out.  For another, until recently I couldn’t.  In bed, shaky hands, foggy thoughts?  Really?  But now we’re all caught up. If I ever figure out how to change the name of ‘The Getting Old Blog” to “On Being Old,” you’ll understand why.