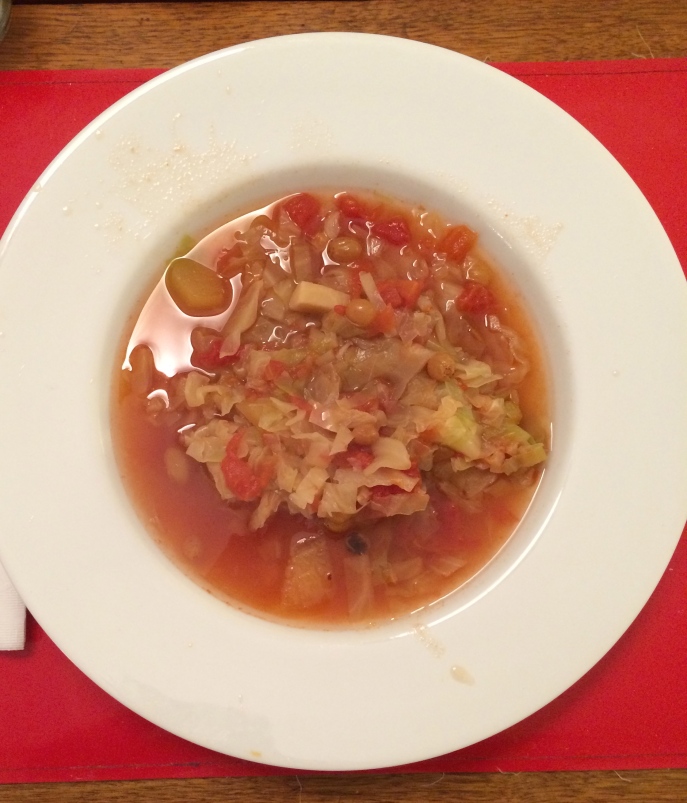 Don’t worry; the soup in this picture was made just a few hours ago.  It’s the recipe that’s historic. I was aiming for the cabbage soup my Russian mother used to serve when I was a little girl. Since she probably learned how to make it from her mother, that would put the recipe back to the last years of the nineteenth century. (Whether or not my grandmother acquired it from my great-grandmother, thereby making the recipe even older, is purely speculative.)

Oddly, my mother always called this historic soup “borscht” even though there were no beets in it. Whatever. It tasted very good. Competitive to the end, she managed with sly evasions never to give me the recipe. Which may have been just as well, because I recall that what she did was a complicated all-day affair involving a huge pot and “goluptsi”  (little birds) cooked in the soup.  And complicated all-day cooking is not for me, irrespective of the taste thrill at the end.  What are “goluptsi?” Big cabbage leaves wrapped around a seasoned combination of chopped meat and rice.  The soup would be the opener, the little birds the main course.

So the recipe I’m referring to here is not exactly my mother’s (or grandmother’s).  However, something that looked as if it would taste very much like their soup eventually showed up in “EAT!” —  a cookbook published by the Parents and Teachers Association of Public School 166 (Manhattan) in March 1975.  I was a P.S. 199 parent of two boys at that time and therefore felt obliged to buy “EAT!” (Especially as I had two recipes included in it myself.)

The soup in “EAT!” was called “Reena Kondo’s Cabbage Soup.” The contributor of this recipe, known to us all as Miss Kondo, had been my younger son’s kindergarten teacher the year before.  She was of Polish-Jewish descent, and I am quite certain the soup recipe had come to America one or two generations prior to reaching her, probably also through the maternal line, thus escaping annihilation in the Warsaw ghetto.

Instead of goluptsi, Miss Kondo’s mother and/or grandmother had added a few pieces of cut up beef and carrots. I have omitted them. I have no recollection of cooked carrots in any maternal soups of my childhood, and my mother would never have wasted a good piece of beef by boiling it in soup.  However, stripped of these decadent refinements, the following reconstructed recipe will taste remarkably similar to what I was lapping up at the kitchen table in Washington Heights in the 1930’s. It makes at least three suppers-in-a-bowl for two adults as a main course. Easy-peasy too. And remember: cruciferous vegetables are very good for you.

[P.S.  If you can’t find sour salt anywhere, squeeze four or five lemons, salt the lemon juice heavily, and add the salted juice to the pot.]

Honey and/or brown sugar (to taste)

2 apples, peeled and cut into eighths

Cut the cabbage into small pieces or shred it.  In sizeable pot, cover the shredded cabbage with cold water and add all the remaining ingredients except the apples, which should be put in towards the end.  Cooking time is about two hours, but after an hour or so begin tasting and adjusting the salt, lemon juice (if you’re using it) and sweetener till you achieve a sweet/sour taste you like. 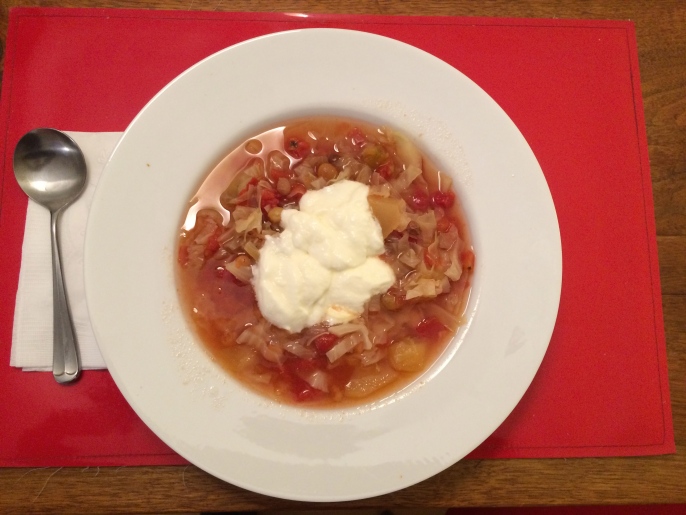 At the table, mix with your soup spoon. Serve with black bread, French bread, no bread.

If you were to make it tomorrow (Thursday), you’d be all set through Saturday.  Who wants to be in the kitchen too often, now that it’s (nearly) spring?