Readers for whom new posts from this blog arrive via email may not have noticed. Between the last post and this one, “The Getting Old Blog” acquired a new name.  It was time.  How long can you go on “getting” old without eventually reaching your destination?

“The Getting Old Blog” began life nearly five years ago, in November 2013.  (This was after three weeks or so of baby-step experimentation in “Learning to Blog” — still out there in the ethernet if you’re interested, although I don’t see why anyone would be).  Despite the scary-sounding year of my birth (1931), I didn’t feel particularly old at 82, and thought a blog marking my passage into the “later years” might be a good place to park bits of memoir (old folks tend to look back), memoir disguised as fiction, and general reflections on what was happening to me as I reluctantly rolled towards becoming 83, and then 84, and so forth.

But as you’ve already read (two posts back in “So What Happened?”) last year was for a nanosecond the end of me. Having your heart stop beating, although they get it going again, really does change the rules of the game. Not to mention the months and months of medical and pharmaceutical tribulation that necessarily follow such a near-terminal event.  Who was I kidding with this “getting old” stuff?  I was old.  I am old.  In bed at night, with the lights out, I can still fantasize that a near-crazed-with-lust eighteen-year-old is pressing hard and stiff against my luscious seventeen-year-old body. It helps, of course, if I’m on my back and an eleven-pound cat is lying vertically on top of my mid-section or else pushing in rhythmically with its two front paws. You think that’s funny? With the lights on, I do too. I know what I look like undressed; I still have a full-length mirror. I’ve been called a lot of things in my life, but no one ever called me stupid.

One of my grandsons, who at twelve of course knows nothing of his Nana’s occasional nighttime fantasies, tried to reassure me last week that “you’re only as old as you feel.” Like many pre-adolescents he’s a sponge for grown-up expressions — even though he still lacks the life experience to know when they’re cliches. To which I immediately replied, “That’s a lot of crap!” and everyone burst out laughing, partly because it’s true, but also because 87-year-old grandmas aren’t expected to say “crap” out loud– at least not in the suburbs of Brandon, Florida.

I’ve therefore been thinking for a while of what to rename the blog. Some ideas — “While There’s Still Time” or “Near Journey’s End” — were too funereal. “What It’s Like To Be 87” was appealing; I could change the number each time I acquired another birthday. But it would be inaccurate. Each of us ages somewhat differently, and what 87 is like for me will not reflect the experience of every 87-year-old woman. I seem to be an outlier.  One example only: I know a number of near-87-year-old women who sleep with their cats but are glad — at least they say they’re glad — their sex lives are over. Hand-holding might be all right, but anything more than that: no-siree, an expression that dates them as much as anything. Bottom line: “On Being Old” seemed most descriptive without necessarily being depressing.  It’s also an accommodating title. It can encompass scraps of memoir as well as details of my life in a so-called “over-55,” but really more like “over-70” or “over-75,” community.  In fact, it will accommodate just about anything about being me at this stage of my life, whatever that stage is.

So welcome to “On Being Old.”  Don’t get hung up on the new name and go away.  It’s really just the same old same old… me. 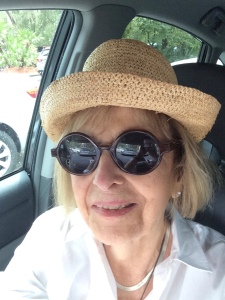 Selfie taken in Florida last week. (Slightly retouched but only slightly.) The sunglasses do help.