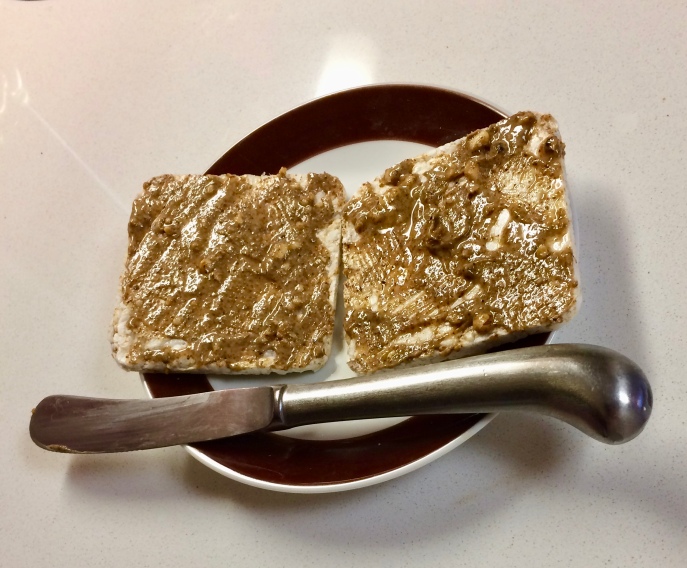 Nearly every morning, after filling a small bowl with fresh organic berries, I spread a tablespoonful of raw crunchy organic almond butter on two brown rice crackers while the water boils for coffee. The reason I’m so precise about the amount of almond butter is because almond butter is caloric. Healthy but caloric.

When raw, without added sugar or salt, it’s also surprisingly expensive, which is interesting to consider. Why should doing nothing to organic almond butter cost more than roasting, salting, and sweetening it first? If I were a culturally responsive and critical blogger, I might have posted about that. But as I’ve always been at heart a me-me-me (and mine) person, I have other thoughts whenever I dip the knife into the glass jar of almond butter and spread the measured amount I’ve allotted to myself on the crackers.

It would be easier to keep dipping until I had enough to cover all the cracker surfaces, preferably thickly. However, given that I’m still vain (admittedly with less and less to be vain about, except I still fit a size 6), I don’t do that. Instead, I try to get as close to the edge of the crackers as possible with the almond butter available on the knife, carefully scraping it thin and out with the blade.

And then nearly every summer morning, rising out of the depths of me as I wield my knife, comes a picture of a narrow-boned slender young woman of perhaps twenty in a miniscule bikini. There’s no extra flesh at all — does she ever eat? — yet you couldn’t call her underweight. She is perfect for her purpose, whatever that may be. She has deeply tanned Mediterranean skin and long nearly straight dark hair. She sits dockside under a café umbrella with two dark men in the sparkling port of Leros, a Greek island in the Dodecanese between the Greek mainland and Turkey. Are the three Greek? Italian? (This part of Greece is a summer getaway for many Italians.) The sun is high, the water — just yards from the café — a saturated gorgeous blue which makes anyone who’s ever seen it long to be back in Greece again. The dark men, in stylish sunglasses, are shirtless; they wear only shorts. Leather slides dangle from their bare feet. They have tangles of dark chest hair, dark straighter hair on arms and legs.

I can’t see her face because she’s bent over two thick slices of warm Greek white bread on a white plate; she’s preparing the bread for one of the men. He’s twenty-six or twenty-eight. He must know she’s doing this for him; he doesn’t touch the cup of bitter black coffee that was part of his order. He’s talking with the other man and smoking while he waits. I can’t hear them well enough to make out the language. As is customary, the bread is served with a lump of butter and a small cuplet of Greek honey. Her hair falling over her face, the young woman spreads the butter slowly and meticulously over the entire warm surface of both slices, until the bread is thinly covered all the way to the soft crusts.

Then she begins again with the honey, teasing it out patiently and slowly over every bit of surface of now melted butter. And again. And yet again. What is this all about? Is it what he expects of her? What she feels is fitting for him? (God forbid a morsel of un-honey-buttered bread enter his mouth?) Why not order more honey? Because he’s the one who’s paying and might not like her not making do? None of this breakfast is apparently for her. And he seemingly ignores her. Not even a friendly pat of thanks. The other man nods, rises and leaves.

We have to leave too. We came to Leros earlier this morning from Lipsi, an even smaller island where we’re spending the summer, to pick up some prints made from a memory stick sent with an acquaintance the week before. Now the noon Flying Dolphin is coming into harbor.  It will soon turn around for the return trip to Lipsi. No waiting for stragglers.

I hadn’t thought about that young woman for a long time. Then I discovered almond butter. Now suddenly, more than ten years later, she comes to me in the mornings as I ply my knife out to every cracker edge, just as she did with the honey. What was their relationship back there on Leros, the dark man with chest curls and his lean subservient handmaiden? I don’t want to think she was just for fun. I like to imagine he had brought her to Leros for a week or two to get her away from some laborious, repetitive job, either in Athens or Naples, because in his way, whatever that was, he cared about her. I want to think they had some kind of relationship; her body wasn’t quite beautiful enough for her to be just arm candy. At other times, on other islands, we saw vacationing men with gorgeous, scantily dressed young women brought along to the beaches to have their luscious glistening near naked flesh everywhere shamelessly palmed and squeezed and fondled, day-long foreplay on public display.  Then when the sun went down, these beauties were fed, doctored with alcohol, and taken to bed, where presumably whatever skills they had, if any, were put to use behind bedroom doors. These young women did nothing all day but lie extended on the sand on their stomachs, idly turning the pages of the same magazine over and over, apparently without shame at their soft supple bodies being so openly degraded by idle male hands, like large pieces of silly putty without feelings.

I hope my young woman wasn’t like that. She’s in her early thirties now. If he didn’t marry her (or she decided in the end she didn’t want him), I hope she found someone else. I also hope she eats now and then, and that whoever she’s with talks to her and loves her. Anyone so dedicated to making two slices of warm white bread as perfectly appetizing as possible, given the limited resources available, deserves at least that, if not more.

You might also wonder why another woman, this one in her seventies, who was sitting near the water in a Greek café while waiting for the Flying Dolphin to take her back to another island, would be so focused on a young woman more than fifty years younger as she buttered bread and spread honey on it. I can only speculate. Because I never had a body like hers? Because dark Mediterranean men with curly chest hair had never looked at me, even in what might have been called my “prime?” (Whether I would have wanted them to is another question.) Because I’m always interested in food, even when I might not let myself eat it because it’s bad for me, has no nutritional value, etcetera etcetera? Or just because I’m always watching other people, listening to them if I can get them to talk, trying to learn something more about life and how we live it, each in our different way, before my own comes to an end? Whichever it was (or all of them), it has now led to me having Proustian memories in the kitchen nearly every morning.

It would be a lie of omission if I didn’t add that when the young woman on Leros comes to mind while I’m putting almond butter on rice crackers, those hot, bright blue and white summers on Lipsi also rise up, almost as alive as they used to be. As Proust observes about the effect of dipping a petite madeleine (a little fluted French cake) in a cup of limewater tea such as his Aunt Leonie gave him as a child when his family brought him from Paris to visit her house in Combray:

And as in that game enjoyed by the Japanese in which they fill a porcelain bowl    with water and steep in it little pieces of paper until then indistinct, which the   moment they are immersed, stretch and twist, assume colors and distinctive           shapes, become flowers, houses, human figures, firm and recognizable, so now all        the flowers in our garden and in M. Swann’s park, and the water lilies of the          Vivonne, and the good people of the village and their little dwellings and the    church and all of Combray and its surroundings, all of this, which is acquiring         form and solidity, emerged, town and gardens alike, from my cup of tea. [From Lydia Davis’s translation of Marcel Proust’s Swann’s Way.]

It seems almond butter – organic, raw and crunchy – is my petite madeleine. I once wrote a first chapter of what was going to be a novella about Lipsi. It was called “An Island of Their Own.” (I did cast it in the third person then, but now there’d be no need that. Almost everyone who’d be in it is either dead or doesn’t read English.) And that was before I discovered almond butter. Maybe I should resurrect it and continue. Not a promise. But I’m not stopping the almond butter in the foreseeable future. So who knows?