Perhaps it’s time for something a bit lighter, after the gloom my last piece seems to have engendered in everyone.  (I won’t even summarize what it was about: too much of a downer.  If you’re curious or have already forgot, go read, or reread, it.)

Since it’s too cold for oldies like me to seek much cheer outdoors, let’s try to brighten the day with something indoors.  Furniture, for instance.  My general rule, now there’s no more earned income, is not to buy any.  What we already have is enough. Bill’s general rule, given my general rule, is to cut out pictures of stuff he really likes and squirrel them away in notebooks, where they can be found without too much effort in case of need.

Need?  Yes, occasionally something falls apart.  Some of the pieces I brought to our menage are even older than I am.  When we married, my second husband and I acquired most of our bedroom furniture from used dealers in small towns north of New York at a time when Victorian stripped oak was big.  (And also cheap. It came from the homes of the deceased just across the Canadian border  where it was acquired “for a song.” Even after the labor of stripping away the dark patina of age and restoring the wood’s natural color, it came within our very modest budget.)  Thus, my share of this furniture, when we divided it up at the time of our divorce, included a stripped oak bureau with mirror: 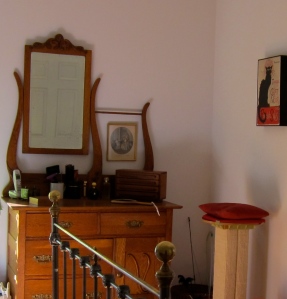 Bill is a modernist.  His tastes run to expensive Italian designer furniture, chairs from Knoll, gadgets from MoMa (the Museum of Modern Art).  He has had his way with our living room and some of the family room, while we still had a little discretionary money to accommodate his desires.  He is also patient.  He waits.  And sometimes he is rewarded.  Four months ago, the whole top part of my bureau, the part supporting the mirror, pulled away from the base and was found to be hanging by two loose nails. Since the years had already streaked the mirror with black blemishes, it didn’t seem worth it to call in a furniture restorer, especially as Bill sided with the Polish cleaning lady, who wanted us to get rid of the top of it before it collapsed on her.  With some difficulty, we smuggled it out of the house and out to the curb in three big black garbage bags.  (Just in case our condo association might consider it didn’t qualify as collectible refuse, if left there in its uncovered state.)

There is another mirror on the other side of the bedroom, hanging on the wall. It’s full length. (This one dates from the time when it seemed important that I not go off to work with my slip showing — a time when there were such things as slips. )  But it has no table near it.  I can’t use it for hair, or makeup, or deciding which earrings to wear.  (The earrings, and other jewelry, are in the wooden box on the right side of the bureau.)

Bill to the rescue!  Whenever he does this to me, presenting something to buy that would never have crossed my mind otherwise, my knee-jerk reaction is “No!” (A little peek into why other people sometimes think we’re so “cute” together.  Ying and yang all the way.)  I will spare you the details of our interpersonal colloquies concerning the acquisition of the new mirror Bill had already picked out before there was a need.  It took me three months of automatically looking at the blank space above the bureau and not seeing any reflection at all, three months of scouring the internet for something attractive to me that didn’t cost north of $500, three months of measuring and imagining what something would look like above my bureau that I had never before imagined, because it wasn’t Victorian and didn’t “go” — until I decided life was too short and even if it was a big mistake, so what?

And you know, it wasn’t. Big, yes; mistake, no.  A huge orangey-red mirror in the bedroom?  Hey, why not? It sure cheers up the morning, and the evening, and bedtime. What else really matters?