I was all set to do a companion piece to my last post.  I was going to call it, “Medicare Part D: Between a Rock and a Hard Place.” It was going to weigh the annual cost of the “optional” Medicare Part D insurance premiums deducted every month from Social Security benefits paid to eligible seniors in the United States against the very real risk of finding oneself in need of having to pay out of pocket at some time in one’s future for prescription pharmaceuticals that could bankrupt you in order to keep you alive.

(Like, just by way of example, $84,000 for the latest, and most effective, treatment for Hepatitis C.  What’s Hep C to you?  Well, I don’t know. But it’s estimated that four million Americans are walking around with those little Hep C suckers swimming in their blood streams and slowly destroying their livers. Many of the four million don’t even know they’re infected, because it happened before the virus became identifiable and could be screened out of blood banks.)

Then I discovered I had already written this companion piece — two years ago! (It was minus the reference to Hep C medication, which came along later. But still….)  The post was called Why Am I Paying $101 a Month for Medicare Part D?  You may even remember it if you’ve been hanging around “The Getting Old Blog” that long. And if you don’t, because you haven’t, you can certainly click the link to read it now.  The piece hasn’t aged a bit, except for the stated price of the Part D premium, which (of course) was somewhat lower two years ago. So rather than repeat myself, as old folks are wont to do, I had better change the subject.

The first thing that comes to mind as a quicky replacement post is a cartoon recently placed on our refrigerator door by Bill, who has taken to musing aloud that our life together would be even more perfect if we had a third cat.  Not so coincidentally, the cartoon is another example of someone beginning to repeat himself  (like me).  But it’s somewhat more amusing than anything I wrote, or could write again, about Medicare Part D. So here it is, even though it may very well fall flat with dog lovers.  I’ll try harder next time. 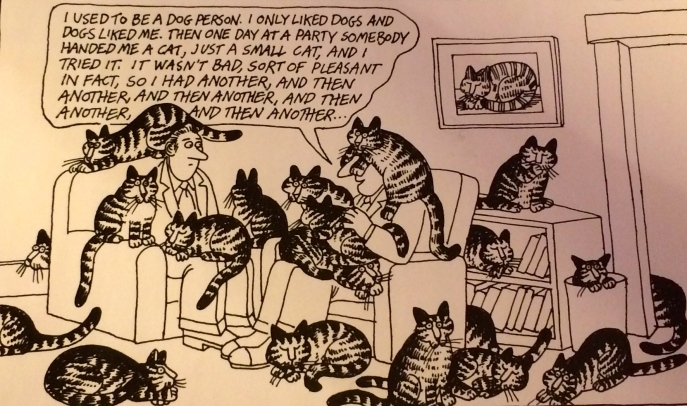