Spanish saints of long ago.

[In the summer of 1990, I left the United States for the first time in forty years on an inexpensive two-week tour for older travelers sponsored by the University of New Hampshire. “Inexpensive” was key for me — which explains why the destination was Salamanca, Spain, the hotel had only one star, the food was unhealthy and unexciting, the program had twenty-eight participants (too many) and I agreed to share a room with a stranger. It wasn’t all a disappointment though. R., my luck-of-the-draw roommate, turned out to be terrific. And during that first trip I learned what I liked when traveling and what I didn’t.]

Among my discoveries was that one of the joys of travel can be eating.  This insight did not come from the breakfasts and dinners at the Gran Via included in the program price, which sustained (perhaps over-sustained) life but could hardly be described as “joys.”  However, in our second week of Salamanca togetherness, R. and I broke step with the others for lunch at a “real” restaurant in a part of the city not considered “Old.” There we found that food as we know it did indeed exist in Spain, together with spotless tablecloths, cloth napkins, crystal wine glasses, leather bound menus and a young waitress clad in sleeveless pastel linen eager to practice her charmingly shy but correct English on us  — the daughter of the proprietor, home for the summer from college in the states.  The bill, by our standards, was high. But worth every penny.

After we had paid it, carefully doling out equal numbers of pesos from each of our wallets, came the interesting question of who was to keep the “factura.”  I want to say that like small schoolgirls playing hooky from the tour, we played one potato, two potato or eeny miney moe for it.  But I seem to recall that in fact R. ceded it to me because of the two of us I was the virgin traveler.  Here it is, all fancy-framed and still hanging in my kitchen:

Souvenir of my first European restaurant meal in forty years.

I see we had wine, salad, perfectly cooked salmon and black coffee. The bread on the bill came, and was charged for, without our ordering it, but neither of us was then savvy enough to send it back when it appeared, not knowing we would have to pay.  Oh well.

Our second hooky experience was more adventurous.  We cut out for a whole day — missing, I think, an educational visit to a convent or two — not specifically for a restaurant meal, but to see the Prado in Madrid. (How could anyone come to Spain for twelve days and not see the Prado?) But it goes without saying  we weren’t going back to Salamanca after the museum without first experiencing gastronomical Madrid.

It was a round trip by train, tickets acquired at the train station by means of R.’s then relatively primitive Spanish.  (She’s far more fluent today.) A woman who taught first grade in a New York City public school wanted to come with us.  Here we are after two or three hours of wandering from Velasquez rooms to Goya rooms to the museum bathrooms. Some people take photographs in museums despite pictograms everywhere showing cameras with big X’s on them, but I was good and didn’t.  So all you get of this wonderful museum, through the kind ministrations of a passerby, is the three of us outside, beneath Velasquez himself: 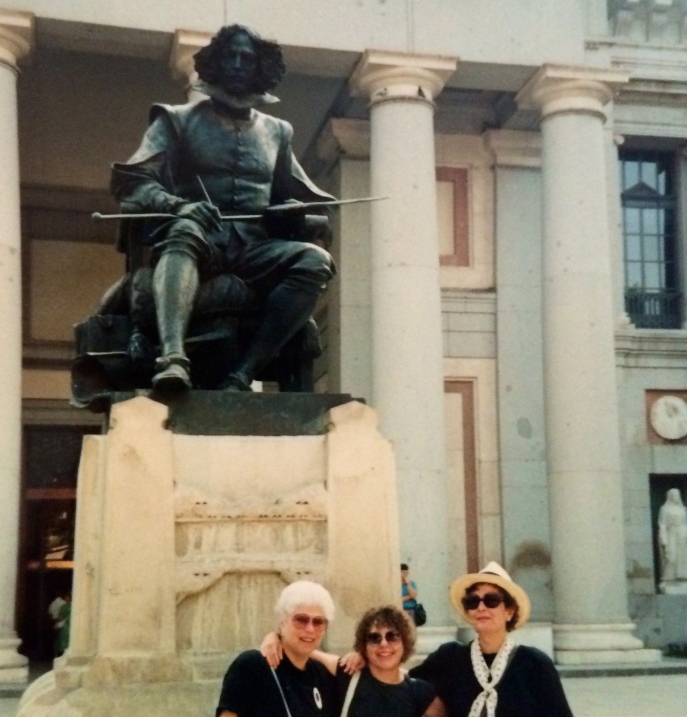 Afterwards, we had a short stroll through a park nearby:

Madrid. Near the Prado. 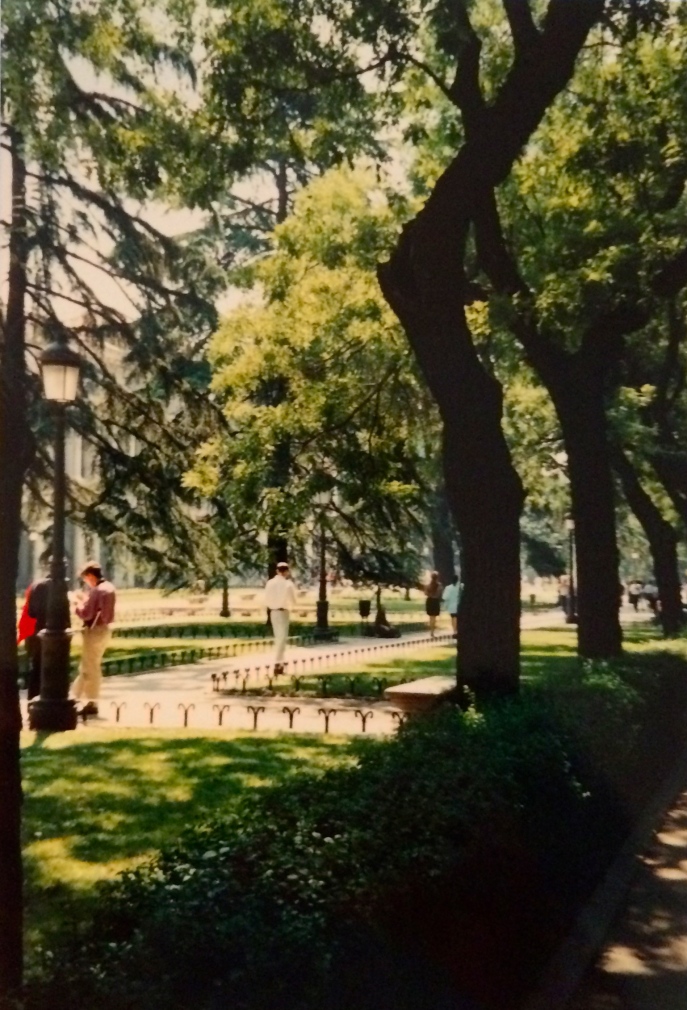 And then — a Madrid meal!  Bookish ladies, we took a taxi to what  the Frommer guidebook identified as Hemingway’s favorite restaurant and ordered, with reckless disregard for gastrointestinal consequences, what the elderly waiter, who spoke some English, identified as Hemingway’s favorite dinner.  Was he really old enough to know? Was this kitchen lore? Piggyback hearsay?  It was roast pork, with many trimmings. (We were all three ethnically Jewish, but had left observance far behind long before crossing the entryway.) It was heavy on the plate, heavy on the fork and later heavy on the stomach, especially in the Spanish heat.  Also very very expensive.  Maybe they got away with charging extra because of the Hemingway benediction? But it was a cozy little place, and fun while we chose and chewed, and I’d probably go again if I were still there, If only to try to find my own favorite dinner on the  menu.

As I acknowledged in the first of these three posts, the Hotel Gran Via — despite its single star (not to be confused with a Michelin star) — did try.  One night, they even provided musical entertainment to enhance their tasteless and boring dinner.  I tend to disfavor non-spontaneous simulations of native culture, trimmed and flavored for tourists.  But then I thought: the musicians were at least working, which might not have been the case for them every day.  And many of our program’s twenty-eight participants seemed to enjoy the hokey performance.  So who was I to carp? I took a picture instead:

After-dinner song at the Gran Via: employed musicians, gratified patrons.

Another afternoon we were taken to a sort of bullfight, with paella afterwards. I say “sort of” bullfight because this bull had had much experience, which is not supposed to happen, and had been trotted out and put through some paces for our benefit.  Neither matador not bull died at the end, and no one was even injured.  (There were no picadors.)

Showing tourists how the cape stuff is done.

But the paella was pretty good.  Not quite as good as one Bill and I ate in Barcelona twelve or thirteen years later, but maybe third most memorable meal of the trip, so I’m not complaining.

Another discovery was how much I disliked being endlessly bused from place to place to cover all the “must see” historic artifacts and “must see” cathedrals in the area, with too-long stops on dusty highways for impromptu lectures and photo ops. The lectures could have been delivered on the bus, if it had been equipped with sound equipment.  And souvenir books contain better pictures, taken by professional photographers, than you can ever take yourself.

“Professor Nena” lecturing about aqueduct with great seriousness during bus stop on way to Segovia cathedral. Lecture was followed by photo op.

I also became depressed by all the unrelieved religious suffering depicted in Spanish art.

Excruciating suffering in Segovia cathedral. Note the skulls below the crucified Christ.

Cheering view from the bus.

Sitting in Segovia’s Plaza Major, where we ate lunch-time sandwiches, was also a pleasant experience: we watched whoever walked by while waiting for more busing. We were going on to Alcazar, summer palace for Ferdinand and Isabella.

Alcazar: the royal summer palace. It’s above the plain, so presumably somewhat cooler than below. But it wasn’t really cool inside, believe me, despite the thick stone walls. And we weren’t wearing layers of fifteenth-century royal trappings!

What I really wanted to see was how life was being lived in 1990 by people still alive. Which is probably why I took this picture on our next day’s busing to the province’s largest city:

You can see where my mind was at.

But by the time we got through the Sculpture museum in Vallodolid, and hurried past the Palacio de Justicia (which would have been interesting to me, but no dice), it began to rain.  So this is all I can show you of Vallodolid cathedral.  Does it look much different than other cathedrals of the period?  I am not the one to ask. 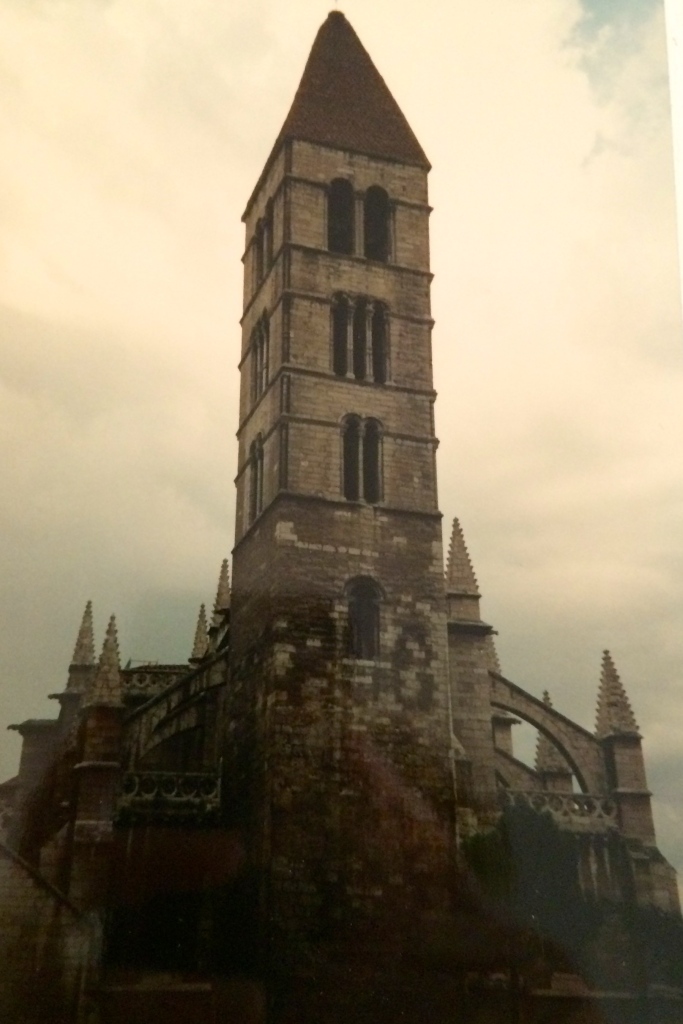 Vallodolid cathedral in the rain.

Vallodolid’s Plaza Major. Same (unanticipated) rain as above. We didn’t have umbrellas.

Here’s a happy picture.  On the next day’s bus trip, to Avila, our pit stop for toilet needs was (oh joy!) an up-to-date modern bathroom.  You can see that R., like me, thought it a welcome event.  At last!

What a great john!

Our destination that day was the monastery of St. Thomas at Avila:

Inside the cloisters of the monastery of St. Thomas at Avila. 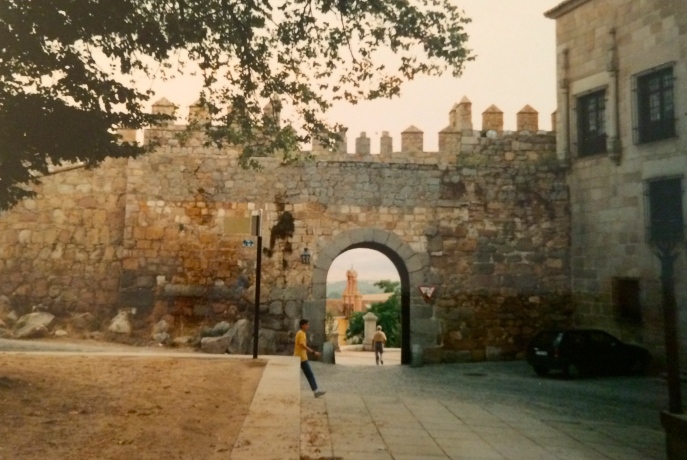 Edible souvenirs of Avila’s Santa Teresa. I didn’t buy any.

When we reached the Avila cathedral, I was cathedral-ed out.  But I couldn’t resist these three near the door: 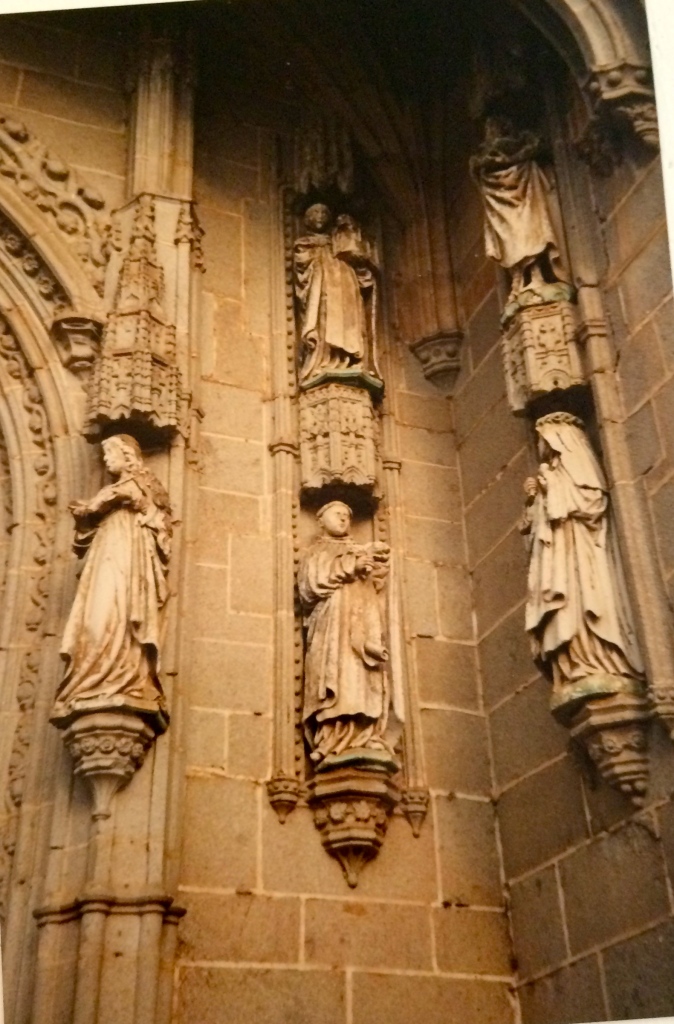 A photo op of something outside Avila. I photographed the photographers. Oh, there is R. in the purple t-shirt, tirelessly taking pictures. I wonder if she still has them, and if so, whether she ever looks at them.

Our last bus trip was to: 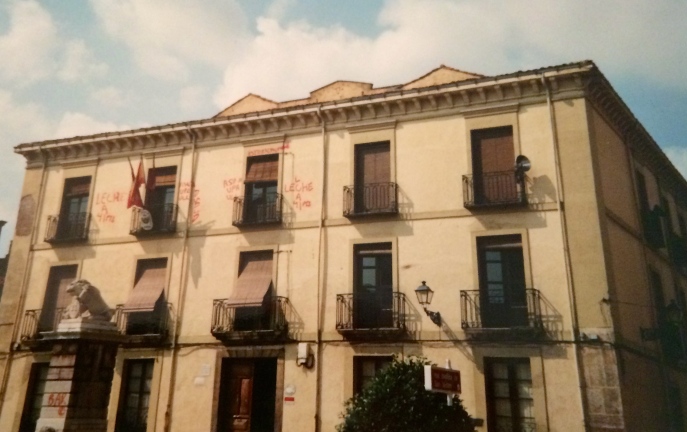 Graffiti even here, in Spain. How did they manage to spray paint so high?

First stop: the Hostal de San Marcos, Leon. This is the most luxurious of all the stops for religious pilgrims. We weren’t supposed to photograph the interior, but this time I was not a well-behaved tourist: 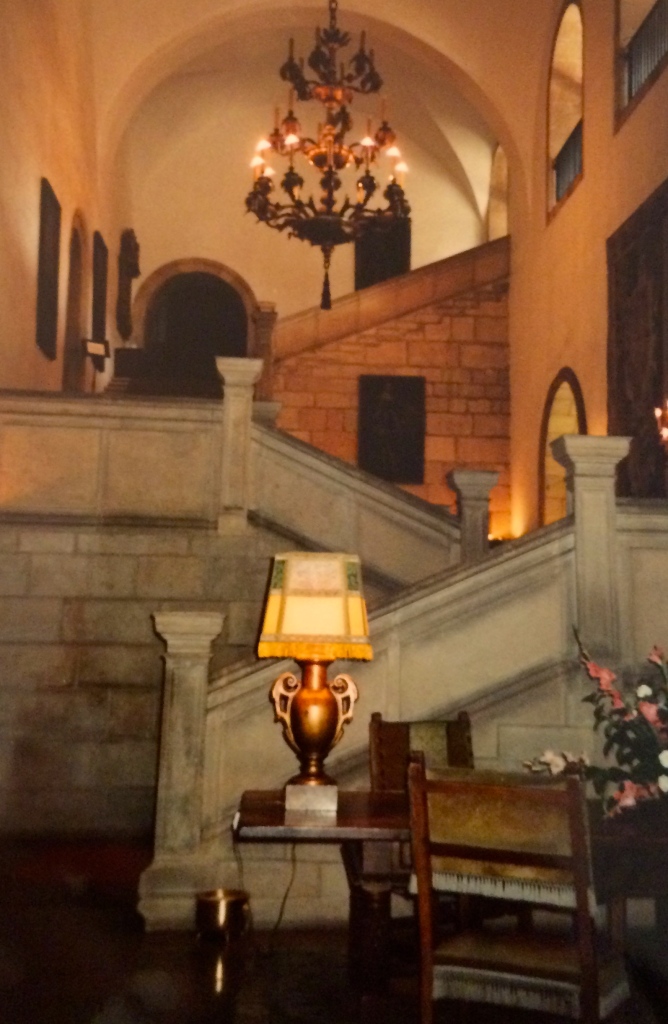 And then it was back to Salamanca for our farewell dinner at the Gran Via.  They tried to make it festive.  We actually had fresh oranges for dessert.  Here is Pedro — yes, I finally found his picture! — peeling an orange decoratively:

Pedro — waiter, maitre d’, général factotum. He did his best. We tipped him generously. I’m glad I found his picture after all.

But of all the photographs of this first trip [and I’ve spared you more than half of them], the ones I still like best — together with the two from behind the village of La Alberca in the last post — are these, taken in front of Avila cathedral.  I couldn’t decide which I preferred, so I enlarged and framed them both. They hang over the upright piano in our small dining room where I can look at them every evening while we have supper.  The children so intent on their game and oblivious to the foreign lady with the little camera are now adults in their thirties.  But in my awkward pictures they remain forever at play with a ball, caught in a moment before they grow up and raise their eyes to the saints above them. 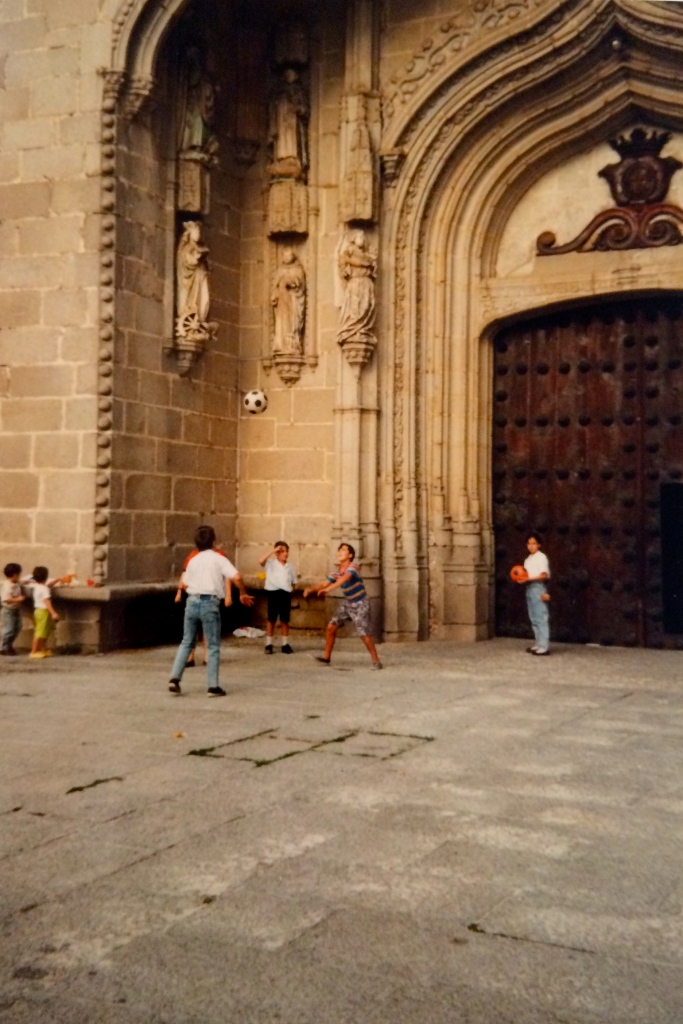 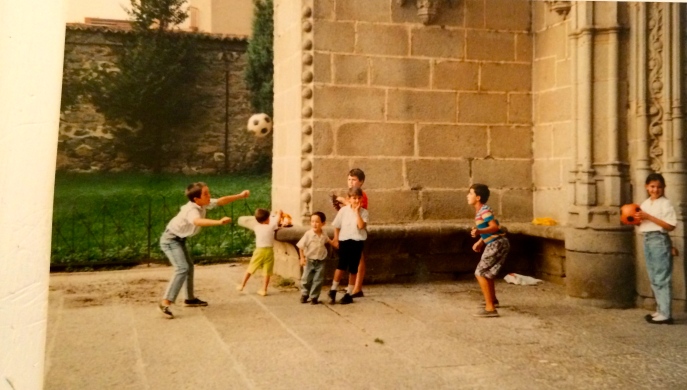 Well, what’s past is past. Time to put the album away and get going with making dinner.

8 thoughts on “A TRIP BACK IN TIME: PART III”