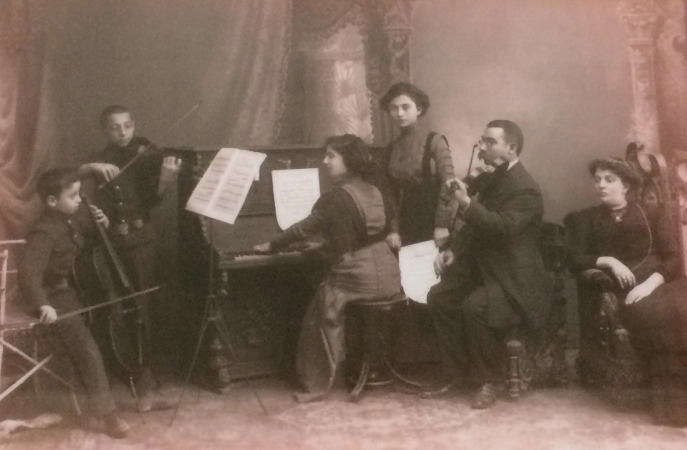 From left to right: Menia (my father), Monia (on violin), Bertha (pretending to play the piano), Bronia, Father (my grandfather), Mother (my grandmother). Probably taken in 1909 or 1910.

[My father died at the end of January 1986, just after his 84th birthday. When he learned he was dying, he began to write a memoir of his early years. He didn’t get as far as he had hoped before he felt too weak to continue. So what I am offering here is all there is. Since English was not his native language, I’ve cleaned it up a bit. But not too much. I did try to preserve his locutions, to give you the flavor of his speech.

This is the last installment of the typescript. Readers who may have just now stumbled upon these memories of his can find my transcription of the earlier pages in the previous five posts of this blog. I wish there had been more to offer. But after the August 12th, 1984 entry below, he put away what he had written and never came back to it.  Perhaps my mother discouraged him. (“Who will want to read it?”) Perhaps he felt too tired and weak to continue what would have been a considerable undertaking. I will never know….]

By then [1909], we had a new helper for Mother: a nice young Russian peasant girl who came to work for the family a couple of years before. Father had an addition built to our living quarters: a kitchen with many cabinets and room for the Russian girl to sleep there. Our own living quarters were expanding as the family was growing up; there was a piano in the house now, although no one could play it, but just in case Monia needed an accompanist to play his pieces with a piano.

I did not start yet on my music lessons. The Russian girl liked me very much and devoted much time to me. She would put me to bed and before I would fall asleep she would tell all kinds of wonderful fairy tales. I loved all her stories and she was telling them very masterfully. Later, I read Anderson’s Fairy Tales, and most of the stories she told me she was repeating word for word. Most likely she had the book and was reading the stories before she was telling them to me, although sometimes I would ask her to tell me again some story that she told me long time ago and which I liked very much; she would remember everything and the story sounded the same like I heard it the first time.

She was not making much money, I guess, but she always was buying me candy and presents, and even once she dressed me up in long pants, which I was very proud to wear because up till then I was always wearing short pants, like all the little boys were wearing. Then she dressed up herself in her best velvet Sunday dress, and both of us went to a photographer to take a photograph together. It must have been very expensive for her; most likely all of her wages for the month went on this memorable outing. I still remember the photograph: she was standing tall and very erect, holding my hand, and I was standing very close to her, coming up to her waistline. Her name was Masha, or Mashenka. I never knew her last name; everyone in the family called her Masha.

She was always there to help me in every way. When there were guests, or the family stayed up late in the living room where our sleeping couch was, she would put me up in her own bed in the kitchen, and when my couch was available would carry me still sleeping in her arms to the couch and tuck me in for the night. When she told me the stories before I fell asleep, she was holding my hand. She was a plain-looking Russian girl, with typical Slav features, but to me she was the most beautiful person in the world! When I started to take music lessons on the cello in the music school, the cello was bigger than I in size, and Masha always walked with me to the school, carrying my cello, and waited there till I finished with my lesson, and again walked back home with me again carrying my cello for me. The school was not too far, about 15 minutes walk from our home. Masha stayed with us until I was about 10 years of age. Then, saving up some money for her marriage, she went back to her village to marry someone arranged by her priest and parents.

When Masha left, Mother needed another girl to help out. I never knew how did Mother find the girls to come to work for us until, after Masha was gone, Mother took me along one day to go and find another girl. We went to the center of town, where there was a large park. In that park there was an area specially reserved for women who wanted to find a job as houseworkers. There I saw very many women of all ages sitting on the ground and chatting among themselves until a prospective employer would appear. Then they all would spruce up and sit neatly and quietly. Mother would look the younger ones over, would talk to some, ask questions, and finally — when decided on one –would tell her all about the job, salary and other details that the job entailed. If the girl agreed to accept the job, she would give Mother her passport. (Everyone in Russia had to have a passport, which had to be registered with police in each city or town where the person was to reside or work.) Mother in turn would give her our address and ask her to come with her belongings next morning. Then, the ritual would be to take the girl to public bath house, and after her bath to dress her in everything fresh and clean and then bring her home to start work!

And so, coming back to the time when I was 7 years of age, my real preparation for entering Gymnasium started, as well as my entrance into music school to study cello. The cello was not my idea of the instrument, but Father’s. He heard a cellist play a solo piece in Odessa and was enchanted with the idea of having another son play the cello, which had such a lovely sound, like human voice!  And this is how the cello became my instrument.

I was not very enchanted with the idea. The instrument was very big, bigger than I was in height, and it was very difficult for me to carry it around. It did not have beautiful case like my brother had for his violin. I always had to find an empty corner where to keep the cello, and it was not always easy!

[Although those are the last words of the typescript, my father also drafted a list, before he began, of the topics he initially intended to cover in his account of his first nineteen years. There are twenty-seven topics in his list, of which the typescript addresses only the first five. The list also stops short of what he promised in the Introduction — the story of his adventures in getting himself out of newly Sovietized Russia and on the way to, as he put it, “U.S.A.”  I did hear two of those “adventures” at the dinner table when I was growing up. So I will try your patience next time with a “Postscript” of sorts, in which I tidy up these matters and also set down my thoughts as I typed my way through what you’ve just been reading….]

6 thoughts on “FROM MY FATHER (Part Six)”