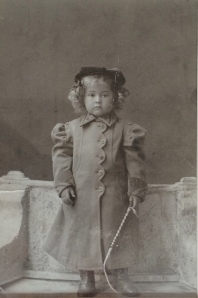 [Continued from previous two posts:  “My mother was born on or about July 16, 1904 in or near what was then Vilna, Russia, to Vladimir Vainschtain and Berta Isaakovna Vainschtain (nee Shulman)….”]

LIFE IN VILNA.  She was not lucky in her place or time of birth. However, until war erupted in 1914, when she was ten, her life in Vilna seems to have been peaceful. Two photographs of her survive from this period, both taken in a studio by a professional photographer. In the earlier picture, she appears to be no more than three, a solemn little girl posed in front of a low plaster wall and facing directly forward.   She is dressed in a long semi-fitted wool redingote that reaches almost to her ankles; it has a scalloped edge running along an asymmetrical single line of buttons from collar to hem and is trimmed with deep cuffs of ornamented velvet and a wide pointed ornamented velvet collar. She also wears softly crushed little leather boots buttoned up the side; they disappear beneath the hem of the redingote. On her gently curling hair, parted in the middle, is a brimless velvet cap, presumably the same color as the velvet collar and cuffs of her coat. She holds a small riding crop in her left dimpled hand.

Someone has told her to stand quite still and look straight at the camera; she is taking this instruction very seriously. The photograph is in muted shades of grey, so one can’t see the color of her coat and cap, but I know that those clear round eyes are brown and that, at this age, her hair is still light, if no longer blonde. She already has the finely shaped upper lip I used to admire as she applied lipstick to it in the bathroom mirror when I myself was a little girl. And even though this photograph was taken more than a hundred years ago, I see in it also the distinctively low round baby cheeks which skipped two generations to reappear when he was little in my younger son’s first-born child, her great-grandson — whom she did not live to know.   Beautifully dressed and cared for, and (I think) much loved, little Musia — or Musinka, as they would have called her –looks gravely at me across the one hundred and seven years that separate us. I wish I could hug her and protect her from what lies ahead. But of course I cannot.

By the time of the second photograph, she is eight or nine and has a baby brother, five years younger. His name? Osia, she told me. Osia is the diminutive of Osip (Joseph). But I learned that later, from reading Russian novels in translation. Not from her. 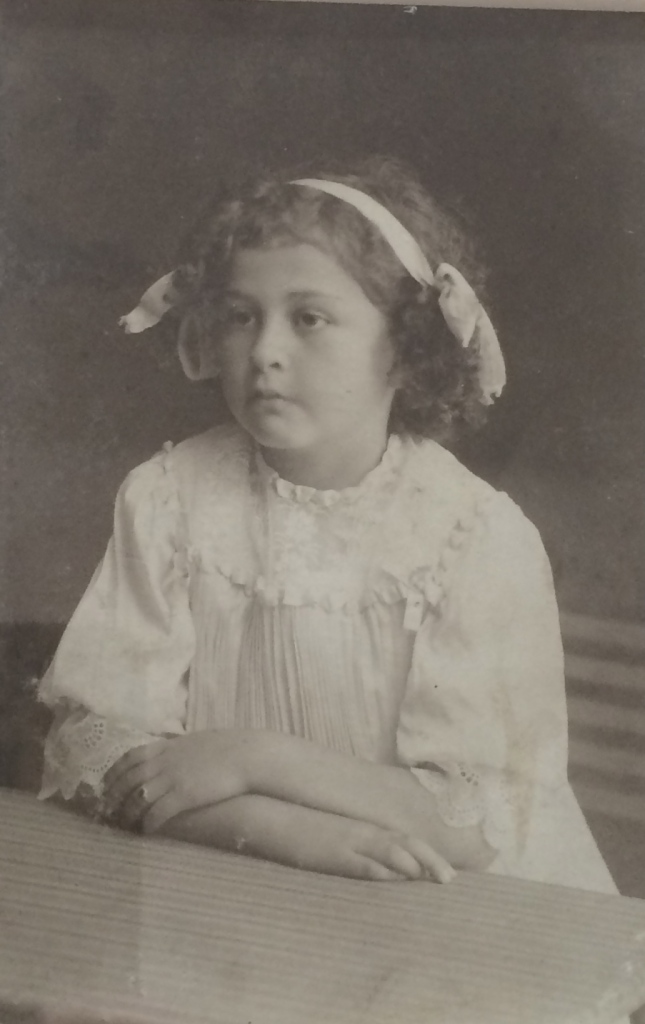 In this second picture, taken in the summer  — a birthday portrait perhaps? — she is turned slightly to her right, so that the camera captures her in seven-eighths view, leaning on her crossed forearms on a low table and gazing into the middle distance. A narrow white silk ribbon is fastened across the top of her head, with a flat bow at each temple and two short trailing ends descending along each side of her chin-length wavy hair.   Her dress is white cotton, the loosely tucked sleeves generously bordered at the elbow with white-on-white eyelet flower embroidery, the collarless and nearly transparent front yoke a wonder of more white-on-white eyelet flower embroidery with even narrower silk ribbons run through its borders, a bow at each side. And below the yoke, the dress becomes a loose cascade of tiny vertical crystal pleats — delicious to wear in the Russian heat, and probably very difficult to iron in those days before electric steam irons. She wears a small medallion ring on the fourth finger of her left hand.

But her enigmatic expression is the focus of this portrait. She seems somewhat sad. It may be that her eyes have already acquired the characteristic look with which I am familiar – pupils positioned high between her upper and lower lids, so that the white beneath the bottom of each pupil is clearly visible, a look which suggests tragedy even where it may be simply genetics. Or perhaps she is impatient for the posing to be over.  It’s clear she’s hot; her hair is damp at the hairline and forming curls from perspiration. But she’s also resigned to the length of the photography session.   Yes, “resigned”  — to what she cannot help — may be the operative word here. Although not yet ten, she already looks like the mother I once knew.

These two photographs are all I have of my mother’s life in Vilna. Just as she never spoke of her father, so she never spoke of that early time except once, when pressed for details, to say she had had a pony. She must at some point also have gone to school, in all likelihood a private school to which Jewish girls were freely admitted, upon payment of the tuition, because I recall her saying that she was later able to earn a place in the “gymnasium” (pronounced with a hard “g” and an “ah” sound) — which had a Jewish quota — only when she entered the “fifth class.”

However, there is one more photograph, in faded brown sepia, which she brought out of Russia together with the very few family pictures she was able to take with her; later, in the United States, she pasted this third photograph on an 8 ½” by 11” sheet of paper, perhaps to preserve it despite its worn fragility.

The photograph shows at its center a wide driveway bordered on both sides by tall trees in full summery leaf. The driveway leads from the viewer to two wooden doors folded back and open to a cobblestone street; along the other side of the street and perpendicular to the driveway runs a low fretwork fence. It’s hard to make out what lies beyond the fence. A quiet brook? Grassy woods?   In the pale far distance, behind the brook or grassy woods, rise four onion domes of varying heights, each topped by a slender spire faintly piercing the sky with the Russian Orthodox cross. My mother made no notation on the paper mounting of the photograph. She didn’t have to; she knew where that driveway was. I know only that in all likelihood it was not in Baku, even then a major city, and that the fragile photograph meant enough for her to take it with her to America twelve years later. Moreover, someone (whose hand I do not recognize — therefore neither my mother or my father) has written a date with a very fine pen point in the lower left corner of it: “1910.” 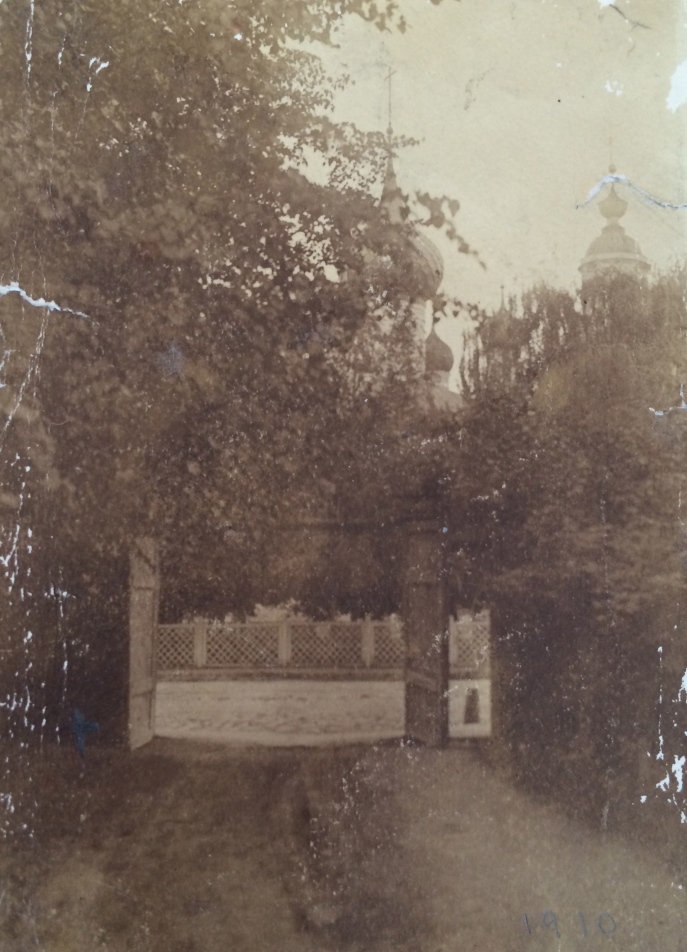 I therefore like to think this fragile sepia photograph my mother brought halfway around the world and kept for the rest of her life is a faded representation of the view from inside the driveway at Vladimir Vainschtain’s estate near Vilna, where once upon a time she had lived with her mother and father and little brother, and was loved and secure, in a place that was home.

Then, suddenly, there was no more father.

And no more home.