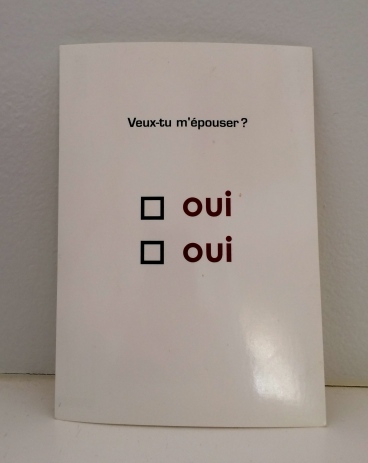 People sometimes ask me — or ask us, but usually it’s some other woman asking just me — why Bill and I don’t get married.  We’ve lived under the same roof and shared all expenses for the past thirteen years.  So what’s holding us back?

There are several answers to this question.

Of course, that is all quite foolish.  Every other year or so, one or the other of us raises the issue again.  The one who might possibly be leaning in favor, of course.  Which is always the time when the other would prefer not to.  And so we are never, even hypothetically, in sync.

Nonetheless, Bill did once give me a Valentine’s Day card that asked, in French, if I would marry him.  It had the two boxes you see above, one of which the recipient was to check.  If I tell you the French word for “no” is “non,” you can see that the card didn’t offer much choice.  I keep the card — unchecked — on our mantel, though.  Because it’s nice to know you’re wanted.  And also to remind him the question’s still out there, and not yet answered, and that there’s only one way to answer it, short of throwing the card away — just in case he were to change his mind.

Equally pertinent to this loopy discourse is a copy of a statuette from The Art Institute of Chicago  which is also on our mantel. We gave it to ourselves as a present one Christmas. (Even though we’re both “Jewish.”)  It looks good from every angle, no matter which way you turn it, which may suggest to you what I’m getting at. 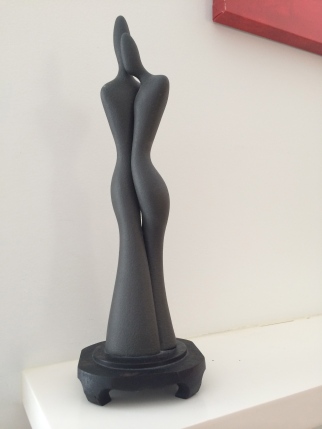 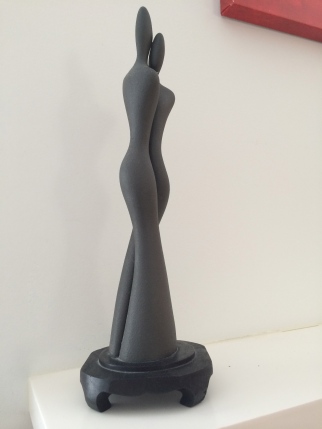 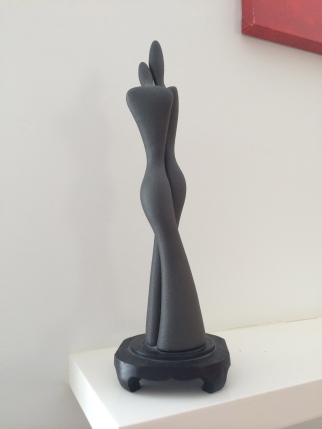 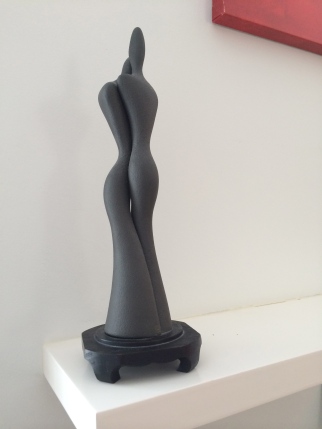 I happen to like best the top and bottom versions (which are similar), perhaps because I think the female figure shows best from that angle and you can best see the alignment of the bodies.  But it doesn’t really matter how they stand on the mantel.  As long as we feel like that about each other, at least most of the time — and can also make each other laugh — who cares whether or not I check a box on the card?