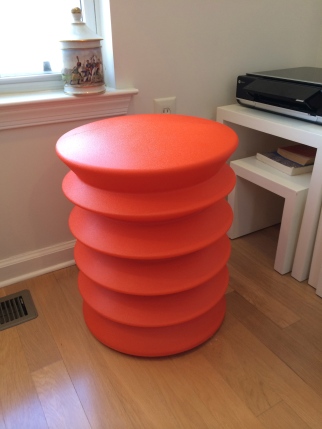 What is it?  Well may you ask.  Its proud manufacturer calls it, alternately, a seat, a stool, even a “revolution!”  (You might want to know it also comes in black.)

I don’t usually fall for advertisements.  That’s Bill’s department.  Boy, is he ever gullible!  I have to hide the sales catalogues addressed to him that choke our mailbox daily, or he could spend hours perusing them in wonder and delight, and then, alas, acquiring too many of whatever is in them, almost never consulting me first. Need I add that nearly all his catalogue acquisitions turn out to be disappointing, if not blatant failures? But me — I wrote far too many ads in my pre-law days not to resist any efforts to extract money from me for items I never knew I needed until some clever ad person set out to persuade me I did.

But everyone has an Achilles heel.  After we moved to Princeton, we bought two sofas from a New York-based furniture company called Room and Board  — one for the family room and another, somewhat later, for the living room.  That lodged me firmly on Room and Board’s email list. I often delete. But a few weeks ago came an announcement of a Room and Board blog.  Still a relatively new blogger, this I had to see.  The first Room and Board blog post began, somewhat defiantly:

You’ve probably heard the disturbing news.  Sitting for extended periods of time — like a lot of us do at work — has been linked to increases in heart disease, obesity and diabetes.  And NPR [National Public Radio] recently reported on a new study that links sedentary behavior with a  greater likelihood of being disabled after age 60. Unfortunately, working out regularly doesn’t decrease your risk for these conditions. Great.  So what are we supposed to do? Thankfully, the answer is pretty simple.  Stand up and get moving.

Pretty simple for Room and Board, that is.  They have two new ergonomic workspace options for us all to “try.”  The first is an adjustable “Float” desk from a company called Humanscale — an adjustable standing desk that lets you quickly alternate between standing and sitting while you work — at what I consider an outrageous price for a desk.  My workspace is not a paid workspace. So the “Float” is not for me, thank you very much.  Besides, I already have a perfectly good desk I’m not about to junk.  Not sure I could type standing up anyway.

However, the Room and Board blog post then continued its recommendations for a healthier life. These good people also want me to have:

…an active seat — anything that lets you wiggle and wobble around while you’re sitting, which strengthens your core and burns calories.  Many of us…have a fitness ball, but we don’t love (a) how dingy they become; (b) their tendency to roll off when we’re not looking; and (c) their space-hogging ways.  Enter the ErgoErgo stool.  Part sculpture, part spring and all fun.

You may be surprised to learn I do have a fitness ball. Unfortunately, mine is the medium size, not the large one that might put my arms at typing level.  However, it’s not dingy at all, since it’s hardly ever been used.  Nor is it rolling off anywhere or hogging space; it’s stored in our basement behind a closed door.  So that much of the pitch didn’t really reach me.

But the part about my “core?”  As someone who still hasn’t done her postpartum exercises in the nearly forty-five years since the birth of her last baby, I am extremely sensitive about suggestions that my “core” needs strengthening. In truth, I doubt I have one, if I ever did. [When did the word “stomach” fall out of use?]   I tell my Pilates instructor the “core” stuff is the part of Pilates I dislike most, which makes her laugh because Pilates is all about building the “core.” The Pilates people try to make it sound like fun, by calling their “core” exercises cutesy names like “froggies” and “tabletop” and “hundreds.”  [“Did we do our hundreds today?”]  But they don’t fool me. It’s no fun at all, and I go once a week, despite the expense, because one must do something. Could the ErgoErgo be another kind of something?  The Room and Board blog assured me it could:

This clever little stool stays put, takes up minimal space and doesn’t require inflating.  The accordion design allows you to rock and bounce, but the semi-pliable plastic feels more supportive than a fitness ball.  We’re all loving this new addition to our office.  In fact some of us are so smitten we’re ditching our desk chairs all together.

I’ve already confessed in at least one prior post how much time I spend on my butt producing a daily post for this blog.  Add in reading time, Netflix-watching time, just-sitting-around-pondering-the-meaning-of-life time and you might say (if Room and Board is to be believed) that I’m hurtling towards heart disease, obesity and diabetes as fast as I can.

I summoned Bill.  Big mistake.  Bill l-o-v-e-d the ErgoErgo at first sight, especially in orange.  Bill loves the color orange.  Still cautious, I consulted ErgoErgo’s own web page, which describes sitting on it as “Active Sitting,” and then immediately declared:

There’s so much to say about the benefits of Active Sitting that it has its own page!….The more you sit on it, the more you work your body, and the stronger your core muscles will be.  And you’ll improve your sense of balance.  But you’ll also benefit if you use ErgoErgo for l5 minutes, an hour each day, or just every now and then….ErgoErgo allows the body to move freely in any direction, and because there is no back rest, you engage your core and back muscles to build strength and flexibility.

With each repetition of the magic word “core” — my heart said, “Yes!”

“What have you got to lose?” said devil Bill.  “You can always send it back.”

It arrived yesterday.  Bill happily unpacked it and brought it up the stairs to my office. “Not heavy at all,” he declared.  We stood it next to the printer while we decided where to put my desk chair.

The desk chair looked terrible blocking the printer and the two nested white tables on which I often put things I’m working on.  Also it made that part of the room too crowded.  I like space.

I hadn’t realized how big and heavy that desk chair is. It does roll, but not over the edges of throw rugs. Since I knew right away it  wouldn’t look good on the other side of my office against the closet doors, we didn’t even bother to try putting it there.

In the end, we just left it temporarily by the window, while I sat down on the ErgoErgo in front of the computer to answer email while enjoying its healthful and core-strengthening benefits.

You know what?  First it felt funny, and then my back began to hurt.  Yes, I rocked back and forth a lot while thinking about the next sentence I was going to type.  And yes, I was sucking in my stomach more than I would usually do when I’m all by myself in a room. (I had to — in order to stay upright.)  But surely my back was not supposed to hurt while I was doing those two beneficial things.  I know what my Pilates instructor would say, as nicely as possible.  She would tell me my back hurt while I was strengthening my core on the ErgoErgo because my core was weak in the first place.  Still, that’s sort of a vicious cycle, isn’t it?

After fifteen minutes, I replaced the ErgoErgo with the desk chair, sat down with great relief, and summoned Bill again.

“Maybe you’ll get used to it,” he said.  I looked at him.  He’s the wimp of the two of us.  What’s with this getting used to pain?

He conceded the point without actually saying so.  “You could sell it to me,” was his second gambit.  Don’t think he would ever sit on it.  He wants to look at it.  He says it’s great design.  Also it’s orange.

“Where would you put it?” I asked.

I’m stubborn.  I don’t like to give up.  Or admit I’ve been wrong.  Or send things back.  I considered leaving the ErgoErgo by the window, as you see at the top of this post (thereby blocking access to the printer and the stack tables), because it would be near my desk lamp, and I could maybe read when sitting on it.  While bouncing? Or working that goddamn core?  Well, maybe not.

How about the empty corner on the landing between the first and second floor of the condo?

Not exactly awful, but a placement that asks the question, “Why?” Who would ever stop to sit or bounce on it — halfway up or down?

The corridor just outside my office door?  Under the wisdom of Rabbi Hillel, who cared not a whit for the core?

As you can’t really see what Rabbi Hillel has to say from the angle of the photo, I thought I’d show it to you again:

Probably not the best place for the ErgoErgo and its self-referential focus on the core.

What about under the Brooklyn Bridge? 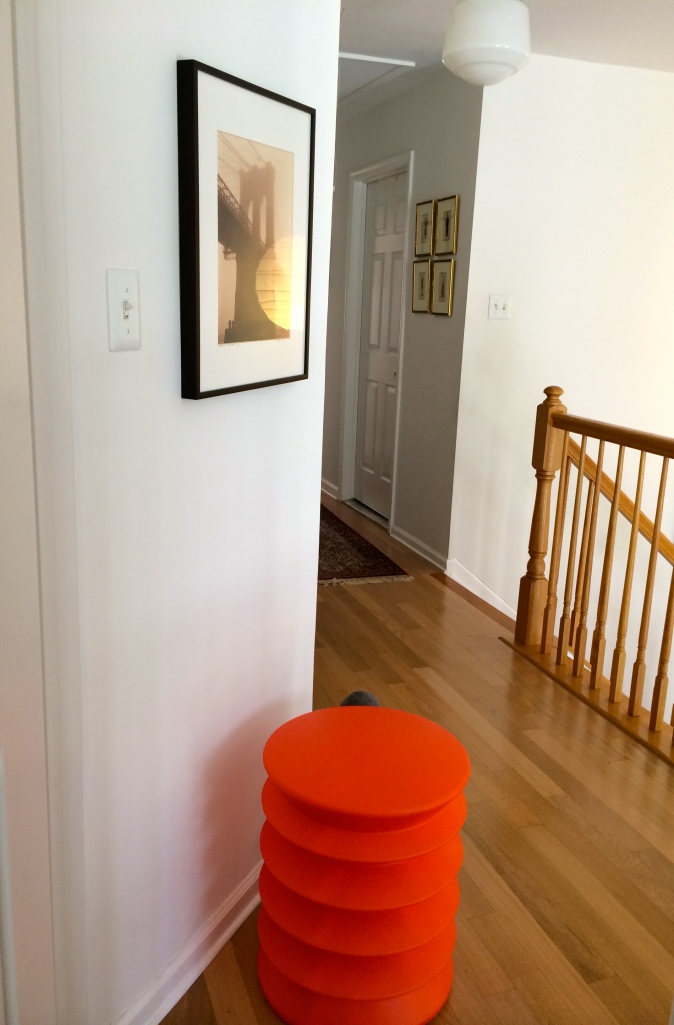 I don’t think so.  It’s really just clogging the hall there.

Maybe I should give in and let Bill have it for his office?

The problem with that is  — there isn’t any room.  Bill has already yielded to too many impulses!  See?

That leaves the laundry room:

Am I really going to sit in there bouncing while I watch the laundry spin?  Absolutely not!

Which means it’s back to the office for ErgoErgo — and trying again.

So I did.  I sat on it while writing this post.  I reached the part where I was about to upload the photo of ErgoErgo in front of the computer before I had to give up.  But that was forty-five minutes into the post.  So I’m doing better than my first time.  Who knows?  By spring, I may be able to lie on the floor and invite someone to jump up and down on my core.  Not someone really heavy, of course.  Maybe one of the cats.

This is not to be construed as an endorsement of, or an advertisement for, or a publicity message on behalf of ErgoErgo. I hope you can see that the post is definitely not any of those things. If anything, what it demonstrates is how two old people are spending their later precious years together — dragging a nutsy-looking, absolutely non-essential orange toy from room to room like young fools, so as not to concede one made a mistake that the other encouraged.  I suppose you might say it keeps us young at heart.