When in a feeble effort to throw things out, I go through souvenirs of trips Bill and I have made together since our first one to Lipsi and Turkey in the summer of 2002, I frequently find business cards given to us by people of whom I have only a scrap of recollection and whom we will certainly never meet again. Out they go:  the card of a businessman with whom we chatted for twenty minutes in the Istanbul airport almost twelve years ago.  (He thought digital technology was going to be big.)  The card of a couple met on a train from Lugano to Geneva, who were going on to Paris. (The husband, significantly older than the wife, was the youngest of seven Jewish siblings, the other six of whom had all been exterminated by the Nazis during their occupation of France.)  The card of a youngish man who taught English at the University of Vermont and was staying overnight at a bed and breakfast in Antigua, Guatemala in 2005. (He was moving on the next day to a speck of village on the shores of Lake Atitlan, where he had a cottage and his neighbor in an adjoining cottage for part of the year was Joyce Maynard, who in her youth had had an affair with Salinger.)

But there is a man whose card I would keep, if he had given us one.  We spoke with him over a bottle of Makedonia white wine — he did most of the talking — for only two hours or so one evening in the late summer of 2002. He did offer his email address, and later (by email) his street address and phone numbers. However, we never saw him again, although we subsequently exchanged a couple of emails and he also sent us two books, one by someone else for which he had made several drawings, and the other a book of cartoons he himself had done ten or twelve years before we’d met, because we’d asked to see it.

That man’s name, and the Italian e-mail address he gave us, which may or may not still be his, remain on my computer contact list.  His name, the e-mail address, a street address in Milan, one cellphone and two landline numbers also remain in a leather-bound address book I’ve had since 2002.  Would any of this data lead us to him if we tried to get in touch?  I have no idea.  We don’t try.  (What would we say?) But I don’t throw any of it out either.  We might not recognize him if we were to meet him again, but we feel — I feel — we know him.  He’s a friend.  Because of the two hours, and the book.  Sometimes life is funny like that.  And who knows?

Actually, he was the one who first spoke to us. It was during our initial visit to Lipsi, a very small Greek island in the Dodecanese — a one week exploratory stay that led to four more summers there.  On the fifth day of the week we took a boat tour of five speck-sized surrounding islands. Ten euros per person: what could be bad?  The boat was the Margarita, the islands were Makronissi, Aspronissi, Tiganaki, Marathi and Arki. You could only get out at Marathi and Arki (and we did, but more of that another time); the other three were rocky promontories good for photography and for swimming near (but not too near).  Swimming off the side of small boats was not for us.  We did do a bit of photographing, though.  Bill took one of me (and the arms and legs and back of some of the many Italian tourists crowding the Margarita): 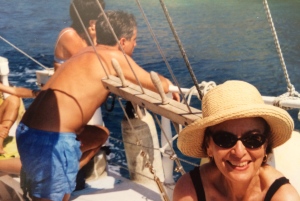 Me, and parts of Italian tourists. On the Margarita, August 2002.

I took one of a lonely-looking little boy sitting by himself:

And we both photographed the rocks and the water: 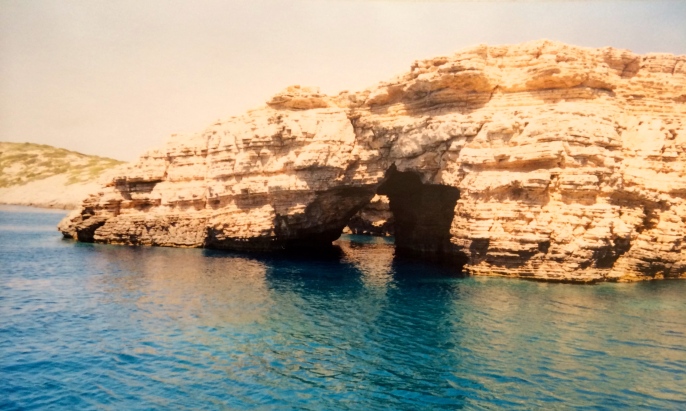 But mostly we did what both of us do best:  We talked with any people who spoke a language in which we could function.  On the way back after lunch and siesta on the sand at Marathi, our talk was mainly with one French couple, because neither of us speak Italian or Greek (the languages of perhaps 90% of the other tourists on the Margarita that day), but I can get by in French and Bill speaks it fairly fluently (although, say the French, with a Geneva accent).  And what people who meet far from home tend to talk about, in an effort to make some connection with each other, is where else they or their families have lived or traveled. So it was with the French husband and me.  We cobbled together a conversation about what had brought his parents to France from their native Latvia and what had brought my parents to New York from their native Russia. (The connection was that both his parents and my mother had come from Vilna, now Vilnius — once Russian, then Polish, then Latvian, but the same city through all the changes of nationality.) Then the Margarita reached land, we all disembarked, and we made an appointment to meet the French couple for supper at a waterside taverna the following evening, which would be our last on Lipsi.

As we stood uncertainly on the dock, not sure whether or not to head back to our not entirely satisfactory room to clean up right away, a man spoke to us, somewhat apologetically, in fluent German-accented English. He had been on the Margarita, he said, and had overheard my conversation with the French husband.  He asked if I still lived in New York.  I explained that I didn’t (those were my Boston years), but had grown up there and knew it very well.  It seemed he had traveled extensively in the Western Hemisphere, had lived in the United States for a while, enjoyed his time there, and liked Americans very much.  He wondered if we could have a drink together after supper.  His wife and son were somewhat tired from the five-island excursion. They had actually done all the swimming offered at all three rocky promontories. (Quite coincidentally, the boy I had inadvertently photographed was his son, who resembled his Italian mother.) So they wouldn’t be joining us, but if we didn’t mind….

Of course we didn’t mind.  And that’s how, later that evening, we got to know at least a little something about a tall, good-looking man from Switzerland who was then about fifty, and who had fallen in love with a woman from Milan, married her, and now lived there himself. 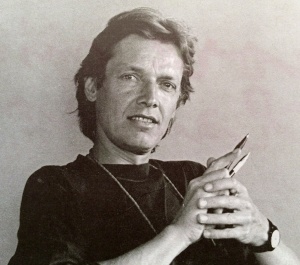 Caspar was primarily a cartoonist — a political one, for the most part.  He sold his work throughout Europe. (He also knew five languages.)  I can’t recall everything we talked about that evening, although I do know that conversations with Bill and me tend to be one-sided, since we are both professionally very good at asking questions.  So what I mainly remember is that we soon got down to Caspar’s thoughts about the meaning of life, whether it had any purpose, and if so what purpose. And after that, we reached his feelings — of being split between longing for life in Switzerland, where he had been born and spent his childhood and where his mother and family still lived, and his connection to Milan, where his wife — who was a psychotherapist — had family, including a problematic mother for whom she felt responsible, as well as a referral network and clients who depended on her, and where his child was in school and growing up Italian.  When they married, they had initially settled in Milan, he said, because he could work anywhere and she could not. But now he felt torn by competing ties, and saw no resolution….

If Caspar ever sees this account of my memory of that night, I hope he forgives me the details. They may be wrong. It was one evening twelve years ago. But I’m pretty sure I’ve got the thrust of it right.  Life is hard.  Life is painful. Whatever we do, we hurt someone we love.  Whatever we do, we hurt ourselves. And sometimes we can say to strangers what must not be said to those who are not strangers.

He and his wife and son were leaving the next day.  We never saw him again.  (We never saw the French couple again, either.  They stood us up.) He sent his two books though, and for a while we discussed by email our coming to Florence and Milan for a visit the following winter.  But Bill and I were still working — at jobs that didn’t permit spontaneous flights to Italy to check in with new friends. So nothing came of it.  Several years after that, he was in Florida on business and had a day free before his return flight.  Knowing it would likely be impossible, he asked anyway if we could meet him there.  Of course, we couldn’t.  (I also suspect he had far more discretionary money than we did, the kind of money that can make things happen right away, if they must.  But we never discussed anything like that.)

However, I would be leaving you with a very lopsided view of him if I didn’t also disclose some of the contents of the second book he sent us.  I’ve omitted that part of his work which is most bitter and mordant, and also whatever requires knowing German, a knowledge I lack.  (Although I did manage to translate, roughly, what the man on the book cover is writing to his beloved.)

[As the cover notes  — and you should too — all cartoons that follow are by Caspar Frei.] 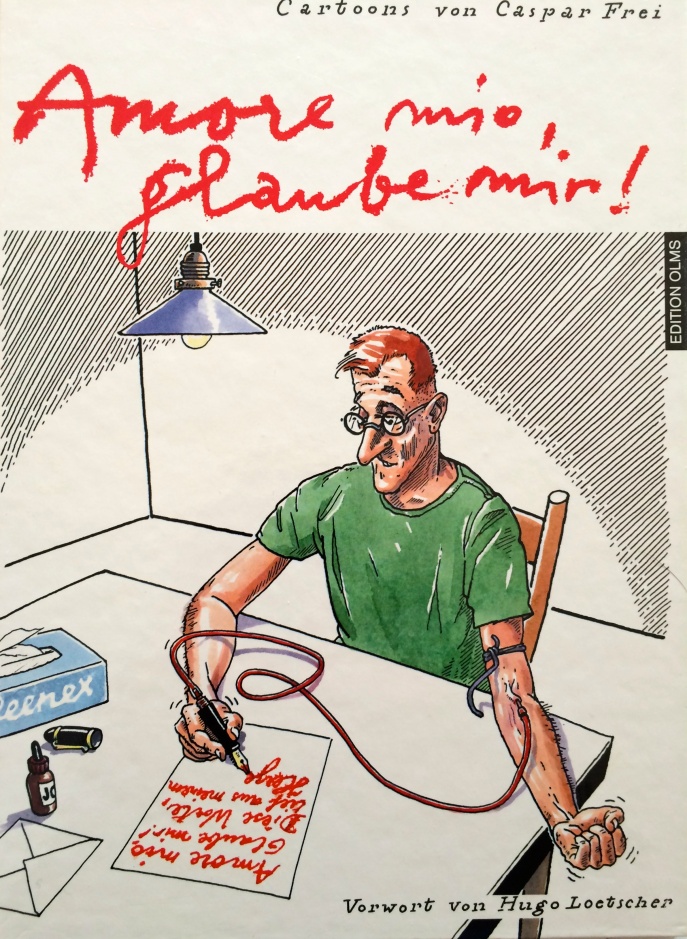 My love, believe me! These words, from deep in my heart…..

Some are cute, or sweet:

Some have more bite: 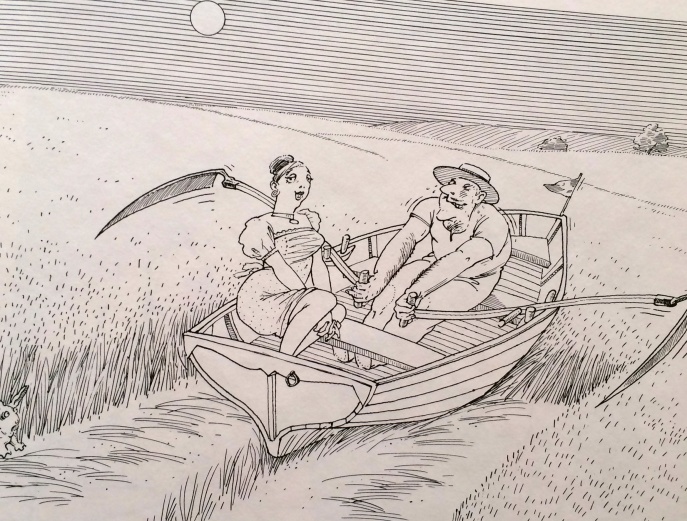 And some make a trenchant point: 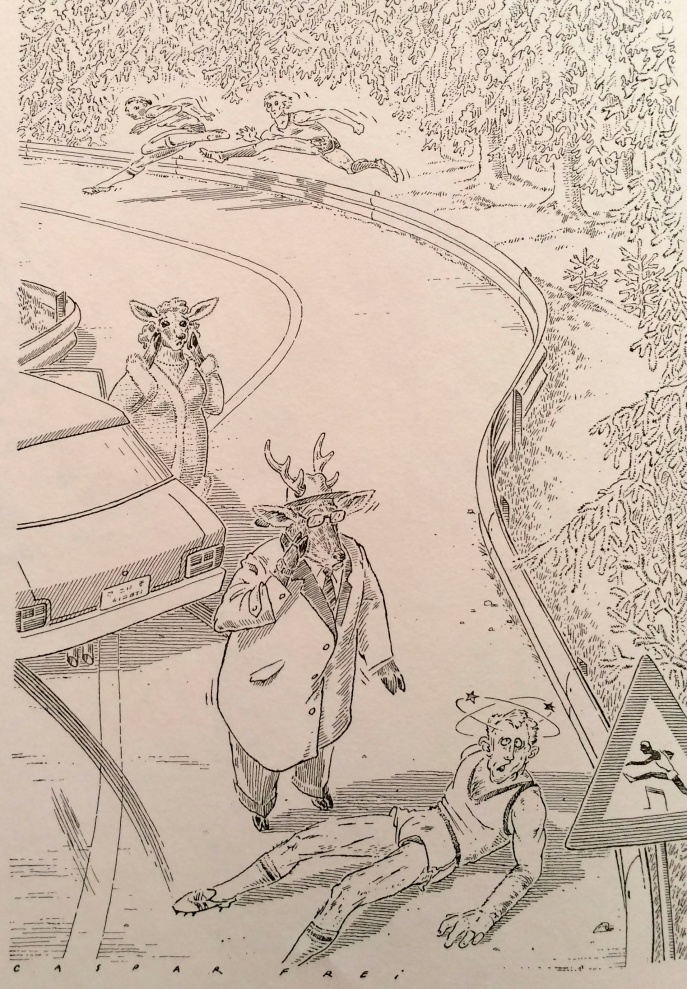 This is Bill’s favorite:

And these are what?  Swiss whimsy? 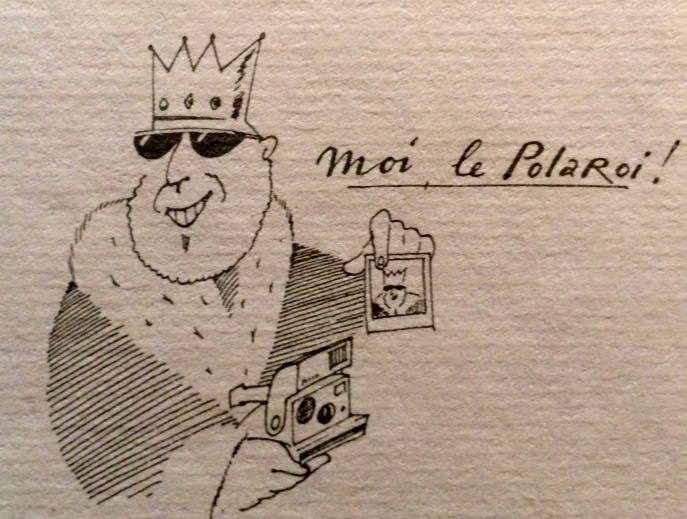 After I thought of doing this piece, I went right to Google — mainly to make sure nothing bad had happened since 2002.  Unfortunately everything I found is in German, including a You Tube five-minute segment of Caspar explaining something or other about illustrating a children’s book.  It was made in 2009, and he looks considerably older than in the 1990 photograph above, or even than I remember him looking in 2002. On the other hand, I did decipher another link that describes him as “Swiss-Italian” and says he now lives both in Switzerland and Milan, so perhaps he has found some closure for at least one aspect of his difficulties now that twelve years have gone by.

But Bill and I don’t really know the man in the You Tube segment.  The one whose name and addresses and telephone numbers I keep is the one who wrote us a note soon after our meeting:

I wish we had had more time to talk too, Caspar.  Maybe someday there’ll be a time when we have more time…..