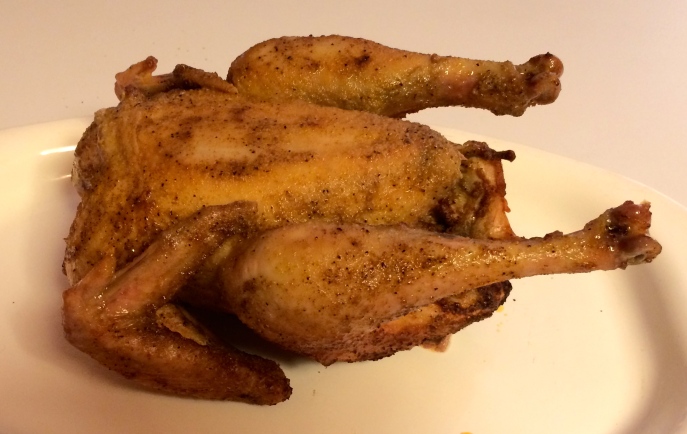 I admit up front that I’m ambivalent about putting this recipe (if you can call it that) out into the greater world.

Sheila’s way with chicken has therefore strongly appealed  to this side of me from the moment she told me about it during the year her youngest child and my older one were in first grade together at P.S. 166 Manhattan.  Sheila (not her real name) had no great love for the culinary arts either; after a divorce, she was busy rebuilding her pre-marital career as a literary agent, which took a lot of non-kitchen time.

[Back story:  Sheila and her senior-vice-president-of-a-major-corporation husband had split over the Vietnam War.  He was (predictably) a hawk, whereas she was a dove. How could she continue living with such a man?  She moved out, but had to stay in the neighborhood — so their three children could continue their schooling uninterrupted although their home life was thereafter split between parents:  three and a half days with one, three and a half days with the other.  I’m not sure how that worked out. After one year at P.S. 166, her youngest child joined his two older sisters in an expensive private school paid for by their hawkish father, and I lost track of Sheila.  But not until after I got her roast chicken recipe.]

Okay, let’s return to the chicken.  What’s so good about Sheila’s method, besides how it tastes (if you’re not vegan or vegetarian), is that there’s no basting, no perspiration from sticking your head in a hot oven, and no drying out, either!  If you use a disposable roasting pan  — de rigueur with lazy cooks like me — the washing up will be minimal, too.

So what’s not  to like?  Why am I ambivalent?  I’ll tell you.  Back when Sheila and I were roasting chickens for our respective broods, there was no angst and public outcry about the lives of chickens.  Maybe chickens had it better in those days, before up-to-the-minute “modern” meat and poultry production practices had come into being to squeeze every last bit of profit from every edible thing with a face.  We could gnaw on our drumsticks with impunity.

But nearly two years ago, I read Eating Animals, by Jonathan Safran Foer.  It turned me from a confirmed old meat-and-chicken eater into something else.  No, not into Natalie Portman (as if it could), although among the tributes reprinted in the book is one from her:  “Eating Animals changed the way I choose what to eat.  After I read it I gave it to everyone I love.”

It’s not only that after reading Foer’s book the drumstick between my teeth became the leg of a little bird that was once alive and had feelings. It’s that I learned the life of chickens — in America, anyway — is no longer a life any chicken should lead.  From birth until early death, they are crowded together in cages or pens where they can barely stand up, are fed unnatural (and bad for you) fattening agents that produce enormous breasts  — consumers want lots of white meat! — and birds so heavy that if they did have room to stand up, they couldn’t support their own weight.  In Eating Animals, I found out where factory-farmed chickens have to shit (guess!), and about the antibiotics they were fed to keep them alive under such inhumane, unsanitary conditions until slaughter.

[News just in: the FDA has now prohibited the use of antibiotics in food intended for human consumption. About time — in that we may in future become less immune to antibiotics when we need them.  But will that in turn mean more infections and diseases transmitted from what we eat?  Higher prices, because more animals will die before they can be slaughtered and sold? It almost certainly will not mean a change in the factory farming practices that produce contaminated poultry and animals.]

[By the way, “Eating Animals” is not just about chickens. Factory-farmed meat is almost all meat, and more than an ethical problem.  Factory farming makes animals and poultry diseased and deformed, it makes us sick, it pollutes the environment.  It’s a public health concern. Want to know more?  Go read for yourself.  He’s a terrific writer. It’s a revolting book.]

You will therefore understand that for nearly a year after reading this book, it was hard for me to approach the butcher section of my local Whole Foods.  Every time I drew near the case containing those seemingly sanitary shrink-wrapped packages of chicken parts, steaks, roasts, chopped meat, liver, I felt nauseous. Whole chickens and Cornish game hens were the worst:  they still looked like what they had been.  Only the heads, feathers and feet were missing.

But it’s hard to break lifelong (and I mean very long lifelong) habits.  It’s hard to confine yourself to nuts-grains-fruits-vegetables.  Especially if you’re also trying to avoid gluten and stay reasonably svelte and sometimes have a meal with other people.

Eventually, some compromise was necessary. (It’s not a perfect world.)  After nearly a year of ratatouille, and gluten-free pasta with tomato sauce, and vegetable soup, and meatless chile, and salad salad salad in the summer (but never chicken salad), I capitulated somewhat. With help from Whole Foods. 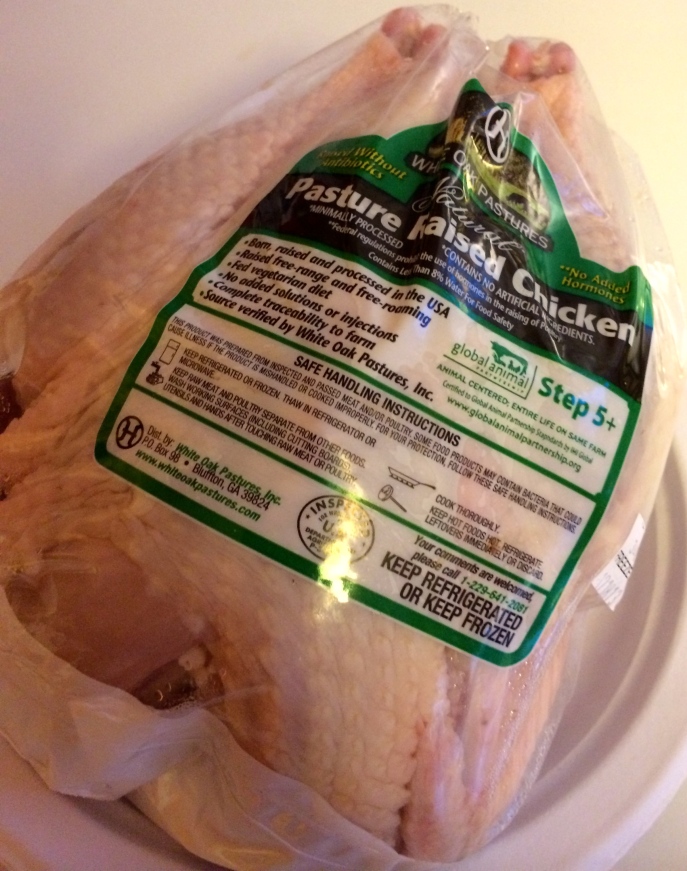 You may not be able to see the label clearly from the photo, so I photographed the label again after it was taken off the chicken.

Yes, readers, I paid over $9 more than I would have had to pay at Shop-Rite to be assured that my chicken had led a happy life before it came to me. Money well spent:  Now I know my chicken freely roamed in pasture all its life, pecking here and pecking there on its own two legs, never being injected with anything dubious to make it taste better or fresher or cleaner or more chicken-y.  My chicken was never transferred to a fattening-up facility, or a cleaning-the-slime-and-shit-off facility.  It spent its whole life on the same farm.   It was raised without antibiotics or hormones.  It was not physically altered at any time.  It had an “animal centered” life. It was therefore a “Step 5” chicken.

[Don’t give Whole Foods too much credit, though.  They do also sell Step 1-4 level chickens, which are cheaper.  Bottom line is bottom line.]

I do not ask how my chicken was slaughtered. I don’t really want to know.  I hope its end was merciful.  But too much knowledge is not a good thing for an old woman like me who still — out of habit or nostalgia or weakness of will, or despair over what to feed her carnivorous guests — does think about roasting a nice chicken once in a while.

So here we go.  Remember: you don’t have to use a chicken like mine.  Sheila’s method works with all kinds of chickens (if you are able to get past what you just read in this post).  I can also assure you that if yours is a Shop-Rite chicken (or its clone), it will have a bigger breast than mine, and more fat under the skin, and smaller, skinnier thighs and legs.  It may even taste more like what you think of as chicken, because of all the crap it’s been fed.  Mine — the Step 5 chicken — tasted like the chicken I remember from the better part of a hundred years ago, when I was a child.

Be that as it may, on behalf of lazy cooks of chicken everywhere, I thank Sheila, wherever she is these days.  Those of us who can’t quite make it to veganism or vegetarianism are grateful.

2.  Pull all visible and detachable globs of yellow fat off your chicken and discard.

3.  In disposable paper cup, mix 3 Tbs. olive oil, liberal amounts of garlic powder, salt and pepper, at least 1 tsp. paprika and at least 2 tsps. powdered cumin.  Stir with old wooden stick you can throw away. If you have no old wooden stick, you’ll have to use a teaspoon and wash it afterwards.  Result should be thick, dark and fragrant with cumin.

4.  Massage contents of paper cup all over outside of  chicken and also over inside walls of the open cavity.

6.  Place  lubricated chicken in roasting pan, breast side down.  Don’t forget: BREAST SIDE DOWN.  Tuck giblets, if you have them, under a leg or wing.

8.  Come back in thirty minutes and turn oven heat down to 325 degrees.  You do not have to open the door or inspect the chicken.

9.  Chicken will be done in one more hour, if you like well-browned chicken, in 3/4 hour if your preferences run to golden.

10.  Transfer chicken to platter or carving board, right side up.  A fork alone may do it, but may not.  Best to take chicken into your own hands, protected by two disposable paper towels or washable potholders.

Tomorrow you can atone with tofu.