This post was one of the three favorites — both with me and the teeny part of the blogosphere aware that I existed — from the blog with which I timorously entered the world of blogging.  (“Learning to Blog” it was called.)  Lucky you!  Another chance to look at it again (or not), thanks to a lovely lady named Natalie. She asked for a photo of my cat Sasha, about whom I’ve written.  I suggested she might want to go back to this post, which features photos of all the cats Bill and I have ever owned together.  “Oh please re-blog it!” she typed.

Normally, I might not, just because someone asked.  I often feel I re-blog too much as it is.  But in about three weeks, Natalie is going to have her knee replaced, and I bet she’s feeling a little scared. Think of a piece of you being removed for good, and maybe you can imagine what I’m talking about.  Having had a hip replaced myself about five years ago, I know that after some post-surgical physical therapy, Natalie’s new knee is going to be so much better than the old one she’ll wonder why she waited so long.  However, right now she’s hobbling painfully on what she’s got. So while she’s hurting and maybe still slightly nervous despite the assurances of her doctors, let’s give her something to take her mind off all that.

Without more ado, I therefore present for your viewing pleasure — ta-da! — (re-blogged from myself):

The Tale (with photos) of Rudi the Cat

Once upon a time, my daughter-in-law — who is a very sophisticated and accomplished woman — saw a little mouse in the kitchen of the New York apartment in which she was living with my son and their two young children. “I never knew she could get so upset about anything so small,” said my son. “She’s insisting we get a cat.” My daughter-in-law has a British mother and a Scottish grandmother and fond memories of British shorthairs. So she didn’t want just any cat. British shorthairs are housecats, expensive ones. As a rule, they’re not allowed to go out and get lost.  My son therefore had to scout for shelter British shorthairs — a breed none of us, except my daughter-in-law, had ever heard of — with the persistence of Churchill. (“We shall never surrender!”) And lo and behold a miracle!  He found three-year-old Max.  I will skip the part about where Max came from, as this is not his story. But let me assure you that no mouse was ever seen in that  Park Avenue kitchen again! 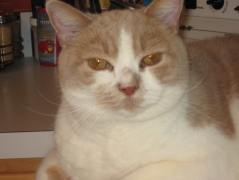 When we came from Princeton for a visit and saw Max, the man I live with fell in love.  I myself thought Max was somewhat cockeyed looking. But, hey, that was the individual cat, not the breed.  And he was endearing.  Friendly, peaceful, quiet.  Nice to have around the house now that all our children, the man I live with’s and mine, are grown and gone.  Maybe, we thought, we should get our own Max. We looked and looked. And looked. And finally caved. We called a breeder. “I want a red kitten,” said the man I live with.  (I myself didn’t really care — red, blue, white, whatever.) “I have a red kitten,” said the breeder. Her red kitten was Rudi. We named him after Nureyev, because he had such a terrific jump.

Rudi as a kitten.

But while Rudi was growing old enough to leave his mother, the man I live with looked at many picture books of British shorthairs and decided that perhaps — despite the non-refundable deposit — he had been wrong.  The ones called British Blues were the classic British shorthairs. “Why not get two?” suggested the breeder helpfully. ”I have a lovely little blue girl right now. They’re close enough in age to play together!” The texts in all the picture books said that the best thing you could get your cat was another cat. 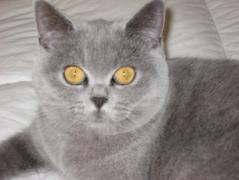 Sasha as a kitten.

The little blue kitten was lovely. We named her Sasha. Rudi loved Sasha.  Sasha didn’t mind Rudi.  They explored the house together.  They played together. They slept together. Rudi wasn’t as clever as Sasha, but he was beautiful.  I loved brushing him.  And he loved being brushed. You could get enough hair off him for a whole other cat.

Rudi also loved to eat.  Naturally, the more he ate the more he grew.  He was big. Not fat.  B-i-g.  It became difficult for him to fit into any litter boxes that would fit into our bathroom. I have no photos of what used to happen because he didn’t quite fit, but you can imagine.

Despite all that, he remained beautiful.  Whenever we were cleaning up bathrooms, or picking up objects he loved to knock down, or vacuuming up hair, we would tell ourselves how beautiful he was. Sasha, on the other hand, was very smart. (For a cat.)  Here she is asleep at my desk, exhausted by intellectual activity.  (Watching the cursor on the screen while I surf the web is tiring!) 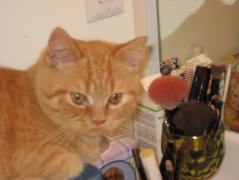 Little Rudi in the bathroom. 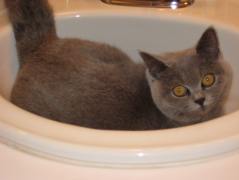 Little Sasha in the sink.

Then our two cats grew up.  They weren’t little kittens any more.

And an awful thing happened.

I will summarize:  It was a case of transferred aggression.  When he was three years old, Rudi was frightened by a raccoon on the deck.  Since a glass door separated him from the enemy, he attacked Sasha instead.   After a few days she cautiously forgave him.  But the next time something angered him, he did it again.  And a month later, with tooth and claw, again. The last time he went after her, he caught her, and she bled. They had to be kept apart.  She was terrified,  he was mystified, in between his spurts of rage. Here they are at this stage of their relationship, in separate rooms. 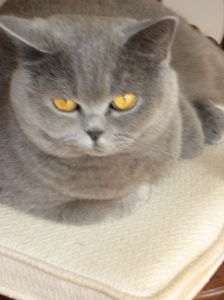 The vets, all three of them, shook their heads gloomily.  Medication wouldn’t really work in such a case.  Rudi needed to be — as they put it — “re-homed.” “Re-homing” means finding your cat another home.  Giving him away.   Rudi now lives with the mother of a Pennsylvania vet and three other male cats.  He gets on with all of them, she says.  She’s sent me some photos.  He doesn’t look unhappy, does he? 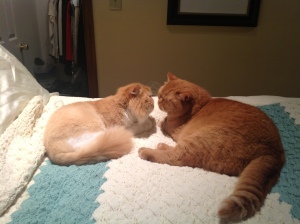 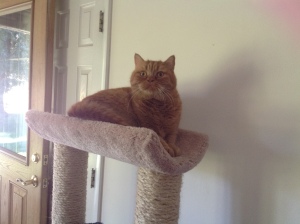 Rudi as a Pennsylvania resident.

But oh, it was hard to let him go, despite his messes.  He was beautiful!  I took some pictures to remember him by.  Even — don’t laugh! — a picture of his tail.  (Bad picture, beautiful tail. I loved brushing that tail!) 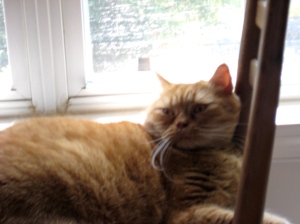 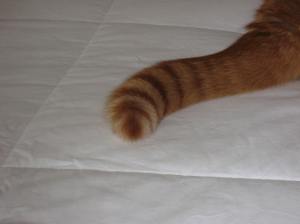 Now Sasha was Queen of the House! 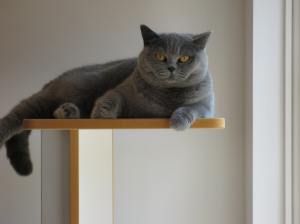 The Queen on her throne. 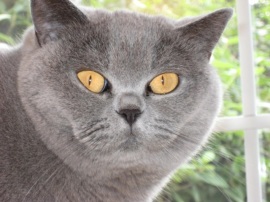 She Who Must Be Obeyed!

The best thing you can get your cat is another cat.  Right?  Then she won’t always be pestering you. Enter Sophie.  (The price of a new Blue kitten had gone up $300 since Sasha, but what can you do?)

She was very small.

End of story.  End of post. Apologies to all non-cat-lovers. Never again. Promise.

[Note to self:  Never promise.]

13 thoughts on “DEJA VU ALL OVER AGAIN, AT NATALIE’S REQUEST”